Music and Passion were Always in Fashion 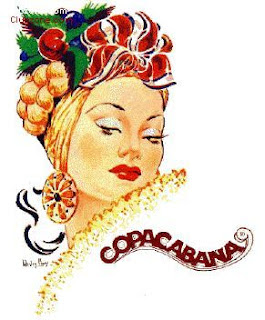 "The Copacabana, the famed New York nightclub that entertained the smart set with a young Frank Sinatra in the '40s and was the inspiration for Barry Manilow's signature song in the '70s is looking for a new home again. Its third incarnation, on a commercial block on West 34th Street, has been condemned by the city to make way for an extension of a subway line".
The club opened in 1941 on East 60th Street at a time and featured acts including Sinatra, Dean Martin, Jimmy Durante and Sid Caesar, not to mention "the Copa Girls, a troupe of leggy, fresh-faced dancers. Joan Collins and Raquel Welch got their start in the troupe". After closing for several years in the early 70s it was reopened as a disco in 1976. In the early 1990s, the club moved from 60th Street to West 57th Street, then about a decade later it reopened on West 34th Street.
The club has been given notice of eviction by July 2007. The club currently offers a 15-piece orchestra that plays mostly salsa music, 'Live Tropical Bands, Copa Girls & Cabana Boys with DJ's playing Tropical Music in the Main Show Room, including Merengue & Bachata. The Lower Floor, Carmen Miranda Disco, features American Music with top DJ's playing Hip Hop, Reggaeton, Freestyle, House, Old School and General Top 40 Dance Music'.
Source: Backstage, 23 January 2007; Copacabana New York

Posted by Transpontine at 10:10 pm