In his essay on the Temporary Autonomous Zone (TAZ), Hakim Bey considers 'TAZ as festival', the party as liberated space and time:

"the dinner party is already "the seed of the new society taking shape within the shell of the old" (IWW Preamble). The sixties-style "tribal gathering," the forest conclave of eco-saboteurs, the idyllic Beltane of the neo-pagans, anarchist conferences, gay faery circles... Harlem rent parties of the twenties, nightclubs, banquets, old-time libertarian picnics--we should realize that all these are already "liberated zones" of a sort, or at least potential TAZs. Whether open only to a few friends, like a dinner party, or to thousands 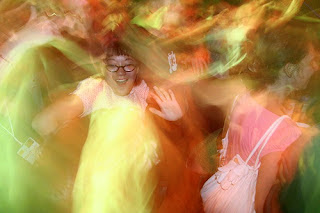 of celebrants, like a Be-In, the party is always "open" because it is not "ordered"; it may be planned, but unless it "happens" it's a failure. The element of spontaneity is crucial.

I have heard tales from some who remember the late 1950s parties and illegal clubs in London that they would put the hoodoo/vodon/obediah Power 'Lord C' on the door to protect them from both the police and criminals looking to extort and threaten the TAZ of the night.