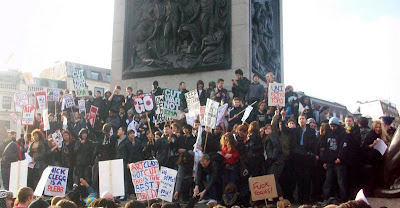 So many student protests in the UK in the past couple of weeks that I can't keep up, let alone follow what's happening in Italy and elsewhere. Which is a good sign I think.

On Tuesday things were moving so fast that when I turned up at London's Trafalgar Square the whole demonstration had moved on unexpectedly through the snowy streets of the West End. On the previous Wednesday in Trafalgar Square there was an amazingly lively crowd, with lots of school students and others climbing all over Nelson's Column. We headed off down Whitehall and within half an hour most of the crowd were surrounded by police where many remained 'kettled' until late in the evening. But not deterred, less than a week later a few thousand were braving the freezing cold to demonstrate again. Interesting times. 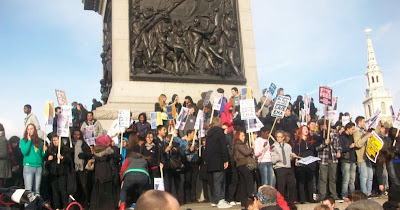 Plenty of time to ponder this significance of this later on, for now just a few more notes on the musical aspects. There were a couple of small 12v sound systems on the 24th November London demo including this one, which was playing hip hop when I saw it - to be precise Modern Day Slavery by Joell Ortiz/Immortal Technique. 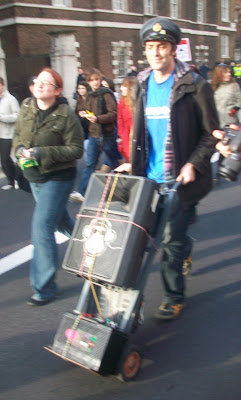 Lots of other music and dancing going on. Here's students dancing during the occupation of University College London (UCL):

And here's students dancing in the occupied Radcliffe Camera Library at Oxford University:

But what is the tune of the of the movement so far? Unexpectedly one contender is from the soundtrack of a film made in 1980. On this week's protests GdnEdinburgh noted: 'Student protesters are singing the Darth Vader tune as police move in to guard the door at the Scottish Parliament'. Meanwhile on the same day in London, Tanya Gold reported: 'We gather at Trafalgar Square at 12 and run. The protesters say they do not want to be kettled like last week in Whitehall. And so the students, a block of teenagers with a sound system that plays the Imperial March from Star Wars, run under Admiralty Arch and into the Mall, then past the Treasury and into Parliament Square'. Two weeks previously on the first big student demonstration in London, Luke Young from Swansea posted on Twitter 'Students on this bus hummed the Darth Vader imperial march as I walked past earlier. They will feel the force later' .
The Imperial March, aka the Darth Vader theme, was composed by John Williams and first featured in the second Star Wars movie, The Empire Fights Back. Coincidently Irvin Kershner - the director of the film - died this week.
The ultimately successful fight of the Jedi against the Empire is now an established myth for rebels everywhere. The Fight the Imperial Forces image below comes from Alec Empire's 1994 album Generation Star Wars. 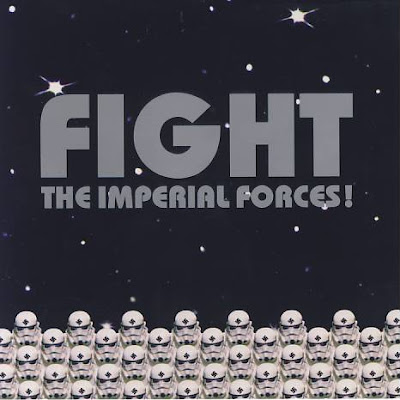 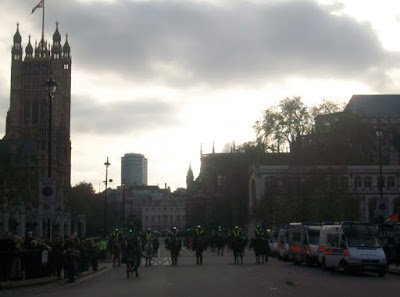