Earlier this year I went to the Eadweard Muybridge photography exhibition at Tate Britain. Of particular interest to me are his studies of dance. 'Woman Dancing (Fancy)' is from his 1887 Animal Locomotion series. An early photographic documentation of the dancing body, it features Kate Larrigan (a 'Danseuse from New York' as he described her). For an animated sequence of these photographs, see here. 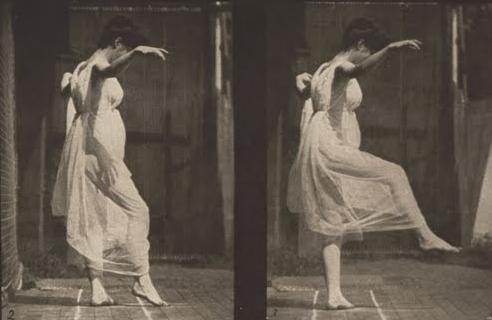 The Edweard Muybridge is on at Tate Britain in London until January 11 2011.
Posted by Transpontine at 7:55 pm

For the last 26 years - on and off - I've been working on what is the first ever novel about Muybridge. Most of the world wasn't much interested in the man and his extraordinary life for much of this time. But now, at last, Hollywood is paying attention – and find it a riveting story – Gary Oldman, Andy Serkis and Cohen Media all currently have films in development, based only on what they have – some excellent, but strictly non-fiction books.

This is the only dramatic novel about the man himself: an adventure story about Eadweard Muybridge: artist, scientist, lover. Strong as an ox and delicate as a flower, stubborn as a mule and trusting as a child, a friend of Royalty and Chinese porters, a household name.


Climb inside his head as he survives death three times, makes the world’s first motion picture, shoots his wife’s lover, stands trial while they test the gallows outside the courtroom window, and takes ten thousand nude photographs. Join him as he looks under the skirts of Nature and captures what he sees at twenty-four pictures a second.

If you’d like to find out what Jack the Ripper, Lewis Carroll, the Lumière brothers, Thomas Edison, Sarah Bernhardt and the future King Edward VII were really like, Muybridge will introduce them to you.

The former Managing Director of Amazon.fr, Cecile Moulard, wrote the following about my novel:

Have you met Eadweard Muybridge? I loved this extraordinary man, I identified with him at times, David Stansfield makes him so alive, so human, so present.
I savored the different levels of the text offered by the author. They complement themselves, nourish themselves, enrich themselves: the child aching for love; the grown-up lover, sincere and immature, murdered and murdering; the father of pure invention at the mercy of his brilliant, tyrannical sponsor; the genius embraced by both the artistic and the scientific community; a man both of and ahead of his time who meets the brilliant opportunist Edison, who is a friend of Nadar, of the obese and charming Prince Edward, of the Lumière brothers…
Stansfield takes us on a journey. This is a book about Talent, about the strange proximity of the artistic and the scientific world, about Love, about the World at the end of the 19th century and the ties that bind the cultural elites of America and Europe. This is a jewel.