Panic on the Streets of London

Not going to attempt to comment on today's epic events in London, with the Government voting to increase student fees amidst riotous scenes, with the Treasury, Supreme Court, Oxford Street shops and Prince Charles's car all coming under attack. Many people injured by riot police charging in with horses and batons.

For now just going to post a few photos and report what I saw. At lunchtime crowds came down the Strand and into Trafalgar Square then on to Parliament Square. 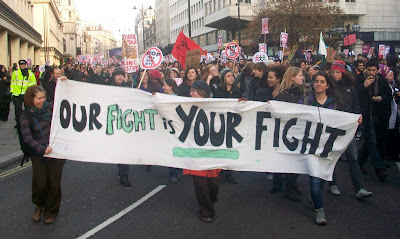 As this sound system came into Trafalgar Square it was playing Damian Marley's Welcome to Jamrock and Tribe called Quest 's 'Can I kick it?'. People were bouncing up and down. Then I heard it playing Benga and Coki's Night. 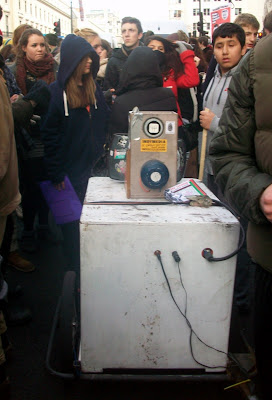 Interestingly the BBC's Paul Mason has written today of the 'Dubstep rebellion':

'The man in charge of the sound system was from an eco-farm, he told me, and had been trying to play "politically right on reggae"; however a crowd in which the oldest person was maybe seventeen took over the crucial jack plug, inserted it into aBlackberry, (iPhones are out for this demographic) and pumped out the dubstep.

Young men, mainly black, grabbed each other around the head and formed a surging dance to the digital beat lit, as the light failed, by the distinctly analog light of a bench they had set on fire. Any idea that you are dealing with Lacan-reading hipsters from Spitalfields on this demo is mistaken.

While a good half of the march was undergraduates from the most militant college occupations - UCL, SOAS, Leeds, Sussex - the really stunning phenomenon, politically, was the presence of youth: bainlieue-style youth from Croydon, Peckham, the council estates of Islington' .

(though while there was certainly dubstep being played, as Dan Hancox notes on Twitter, the sounds of grime, rap and bashment were also prominent: 'they banned grime from the clubs, now THERE ARE 300 KIDS RAVING TO POW IN PARLIAMENT SQUARE' (Lethal Bizzle's Pow).

There was the usual percussion... 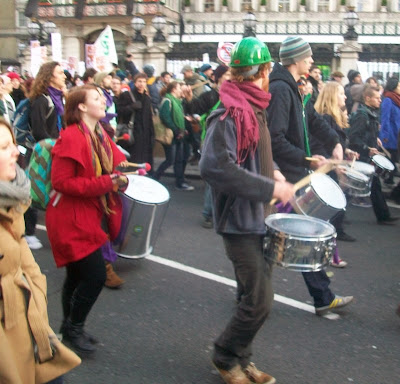 ... and the not so usual bagpipes: 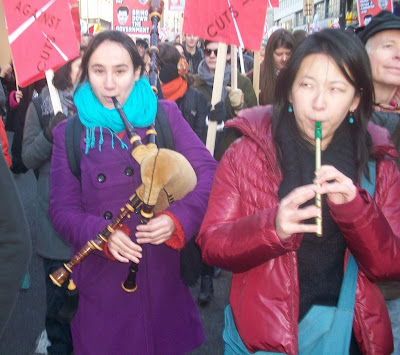 Later in the evening on the Victoria Embankment there was what seemed to me to be an attempt to use music to pacify the crowd with a National Union of Students bus playing music and then telling people to disperse. Bizarrely they had hired private stewards (SFM) who were blocking the road to stop demonstrators heading down to the House of Commons where a line of riot police were guarding the entrance to Parliament Square near to Westminster Bridge. People pushed past the stewards who got very aggressive - two of them shoved me as I walked through afterwards.
A couple of hundred then formed up at the police line, including this trumpet/guitar duo who were playing 'A message to you Rudi'. 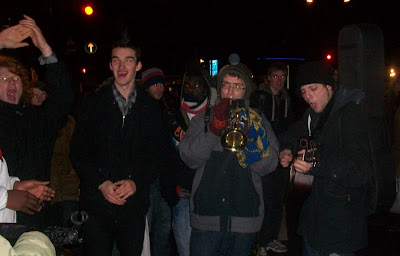 I went round to Trafalgar Square having heard that there was an occupation going on at the National Gallery. Then around half past seven a crowd surged across Trafalgar Square and there was an attempt to set alight to the big Christmas Tree - no doubt inspired by the burning of the tree in Athens during the December 2008 riots.
The crowd of several hundred started going up Charing Cross Road and then on to Oxford Street. The police had totally lost control, in fact they were nowhere to be seen with the exception of a couple trying to keep up. People were blocking the road with rubbish bins etc. and on Oxford St there was lots of chanting outside the shops targeted recently in the UK Uncut campaign - Vodafone and Topshop closed their doors. But I didn't see any windows smashed. I doubled back down Oxford Street where another crowd had emerged by Oxford Circus, with police pouring out of vans. This time the main Topshop window on Oxford Street had been broken, and 'pay your tax' painted on it. 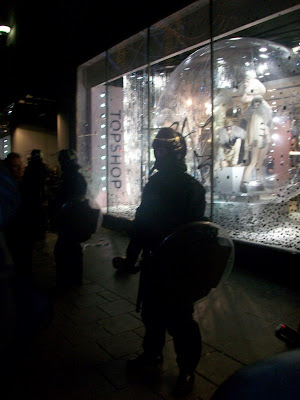 Although by now police had formed across the road, they didn't seem to know what to do. Oxford Street on a Thursday night before Christmas is full of shoppers and tourists and it wasn't easy to tell who was standing around excitedly watching and taking photos and who was a protester. Every so often the police would surge forward and shoppers, tourists and protesters would scatter, then another stand off started. 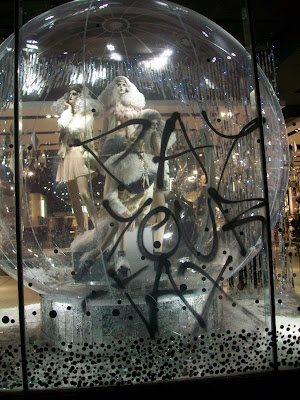