One year after the election of Margaret Thatcher as Conservative Prime Minister, the uprising in the St Paul's area of Bristol in April 1980 was the precursor to the inner city riots that swept the country in 1981. The riot was sparked by a police raid on a cafe in the context of broader conflicts about racism, black sociality and licensing laws. In the ensuing uproar police cars and a Lloyds Bank were set on fire. 134 people were arrested, 88 black and 46 white so it is misleading to describe it as a 'race riot' (as the media tended to label such events at the time) even if police racism was a major factor. Remarkably, in the most serious trial arising from the riot, the jury failed to convict 16 people charged with 'riotous assembly'. The collapse of the trial in March 1981 was followed a month later by rioting in Brixon and then the wave of summer uprisings.
The first document is an extract from the book Uprising! The Police, the People and the Riots in Britain's Cities by Martin Kettle and Lucy Hodges (London: Pan Books, 1981):
'St Paul’s is an area to which black people from all over the city come for parties, shebeens (illegal drinking clubs) and to play ludo, dominoes and pinball machines at the Black and White Café, the premises where the spark for the riot was lit. They come because there is nowhere else to go. Much of the activity is perfectly lawful and, even where it is not, it involves behaviour such as illicit drinking and cannabis-smoking which does other people no harm. If the district is the focus for black social life in the city, the Black and White Café in Grosvenor Road, the ‘frontline’, is its nerve centre. When the riot broke out, it was the only black café (it,is in fact run by a black and white husband—and-wife team) which had not been forced out of business for contravening local authority health regulations or for similar reasons. But it had had its licence to sell alcohol removed. A seedy joint created out of the ground floor of a terraced house, the café was of great importance to the black community. It was the only bit of territory they had left and they were prepared to fight for the right to do what they liked there...
What brought hundreds of black and eventually white Bristolians up against the law on 2 April, 1980, a day when the schools closed at midday, was a police raid on the Black and White Café. This had happened many times before but serious violence had never broken out though it had in London in connexion with the Mangrove and Carib clubs). On the Second, as the occasion become known, thirty-nine policemen armed with search warrants for drugs and illegal consumption of alcohol moved in; the majority were to go into the café and the rest were to be held in reserve...
What they could not have known was that tension was high in the Black and White that day. There was much talk about a St Paul’s youth who had been arrested on ‘sus’ in London and was appearing in court the following day. Young blacks were angry about the ‘police harassment’ and talked of going to London to protest. At about 3.30 p.m. the officers, the drugs squad in plain clothes and the rest in uniform, raided the café. They searched the place and questioned the twenty customers, searching some of them as well. Bertram Wilks, the café’s owner, was arrested and taken away in handcuffs, protesting loudly, to be charged with possessing cannabis and allowing it to be smoked on his premises. The police found large quantities of alcohol, including brandy, vodka and 132 crates of beer which they proceeded to load into a van in front of a growing crowd outside.
The loading took a long time because there was so much liquor. As each crate was humped into the van, the crowd grew more restless, and when the van left a bottle was thrown, but there was no real violence as yet. A man complained that his trousers had been torn by a police officer in the café, an allegation which was later canvassed as the reason for the riot, and drugs squad officers made a run for it clutching their booty. This was what really seemed to annoy the crowd. ‘Let’s get the dope, let’s get the drugs squad,’ they are reported to have shouted. Missiles were thrown in earnest at a police car and at officers, and the riot had begun.
The violence spread quickly: officers outside the café took refuge inside under a steady hail of bricks, bottles and stones from the crowd of black and white youths which had grown to about 150 (others were looking on) on the grassy area opposite. The police radioed for help and at about 5.30 p.m., two hours after the raid began, reinforcements arrived, assembling down one end of Grosvenor Road and marching down the road to rescue their besieged colleagues. This was a hazardous operation, with officers coming under a terrific barrage and being forced to take cover under crates and behind dustbins. It was the start of the really serious violence. As a black prostitute told the Sunday Times: ‘They came down the road, left right, left right, like they were on parade. They had dogs with them. When they came in front of the café, we let them have, it.’ The mistake the police may have made was to try to impose control with too few men. The marching column contained only 100 police and, on this interpretation, was a positive incitement to the angry crowd.,, Defence counsel at the riot trial months later suggested that the police had provoked the crowd by their military- style tactics. The police said, in turn, that they hoped this show of strength would disperse the crowd. It did no such thing'. 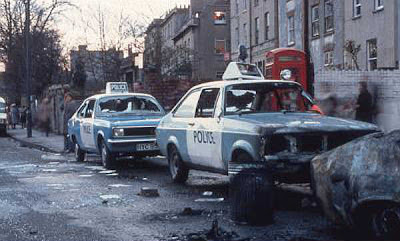 Diane Abbott is hardly a reliable witness. Firstly, she was not actually there and secondly her more recent record is hardly a gleaming beacon of leftist political action. The extract from 'Uprising' is interesting but hardly objective, using hearsay as facts. It's true that the riots were something of a watershed in British social history but middle class reporters have a tendency to romanticize mundane facts.

I know that Diane Abbott might not be a reliable witness, I included her piece precisely because it shows how far someone can travel in their political views, and also because it is an authentic example of how certain kinds of leftists viewed the riot at the time. As for the Uprising book, it was written at the time by journalists who did not have a particularly romantic view of the riots, but may not always have got their facts right. Are their things in what they say that you think are factually incorrect?

Hi, Please could you tell me the title of the article Diane Abbot wrote in The Leveller, no.38, March 1980? Thanks!

I WAS THERE FROM THE BEGINNING TO THE END . AND MOST OF WHAT DIANE ABBOT HAS WRITTEN IS CORRECT

Hi R, eddie here i remember it well and i have not had time to read what was said however i trust your word so i know it was correct. respect

I was there on Grosvenor Road when it kicked off. There were far more than 100 police. Many were young police officers who were trembling in their boots. I think it was deliberately provoked by the government as an excuse to upgrade the police riot vans and test the riot equipment -shields etc .It was carried out at high profile school home time so as to have maximum audience effect. It was an example of old white men in power pitching young men from different communities against each other ( ie the police and the locals) Many people there were white.People were arrested indiscriminately. Older people were hiding in their flats terrified of the police.The side streets had already been blocked off to prevent kerb crawlers and reduce traffic circulation. The police were lost -many had been drafted in to the area. I sa a police landrover driven in panic up one of the side streets -it was blocked off -in the haste to turn round it pinned a young man up against the wall trapping him . The community surrounded the landrover and lifted it up and turned it over. This was teported by the media as wanton violence and destruction. There are no words to describe thd sheer affrontery of what happened that day and to my mind it was designed as a show of force and control by a powerful state which was traini g its police officers in riot and street battles as they also upped the anti with the miners.