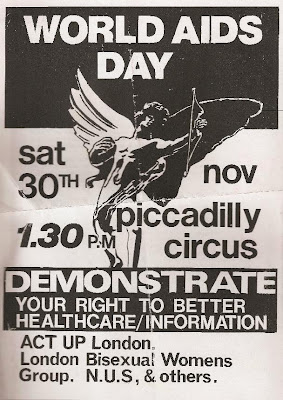 Today is World AIDS Day, a day for everyone to reflect on the ongoing global health disaster that is HIV/AIDS. For me personally, a time to remember my time in the 'AIDS Wars' as a HIV worker and sometime activist in the early 1990s, when prejudice was at its height and medical treatments were in their early stages. A time too to remember those who haven't made it through, like 'Jane', one of the founders of Positively Women who I met at a World AIDS Day event I helped organise and died not long after.

On World AIDS Day 1991 (or to be precise, the Saturday before - November 30th), I took part in a demonstration at Piccadilly Circus. It was quite small - probably only about 100 people - but fairly lively, featuring the famous Sisters of Perpetual Indulgence radical drag nuns. People sat down in the road and chanted, among other things, 'we're here, we're queer, we're not going shopping' before the police piled in. 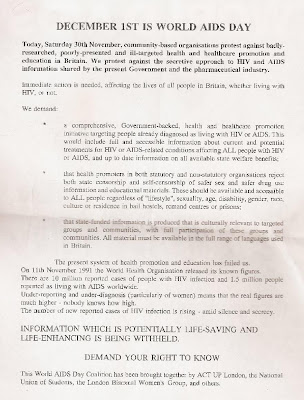 The following report by Nicola Field was published in the magazine Mainliners (for drug users with HIV), Issue 18, January 1992:

'On November 30th I went along to a peaceful demonstration in central London marking this year’s World AIDS Day. Organised by the London AIDS Coalition to Unleash Power (ACT-UP), the London Bisexual Women’s Group and the National Union of Students, the demo aimed to draw attention to the scandalous lack of information surrounding treatment, healthcare and safer sex/ drug use in this country. The action was interrupted by a violent and brutal attack by the police - more of this later...

Anyway, it was good to gather together in Piccadilly, around the statue of Eros. the Greek god of love, and inject a bit of sanity and reality into the chaos of Christmas consumerism. Quite a few passers-by hung around to read our leaflets. Wildly warpainted Sisters of Perpetual Indulgence from Britain and the US looked brilliant and kept everyone buoyant as a number of people spoke to the crowd about the need to fight back against ignorance, hatred, censorship and intolerance. What stuck in my mind was an American activist forcefully reminding us that we have to take drastic direct action, targeting the institutions which control our access to information and new treatments. Alison Thomas of the London Bisexual Women’s Group told how the media went to Moral Town after the death of Freddie Mercury: as you probably know, Freddie was accused of being a ‘vigorous bisexual’ (!), of living a depraved lifestyle - because he loved men and blamed for his own illness and death. She demanded that the government ensures we are given proper information about safer sex so that we can make our own choices. The number and gender of our partners is irrelevant when it comes to HIV prevention, so long as we take care not to exchange blood, semen and vaginal fluids. 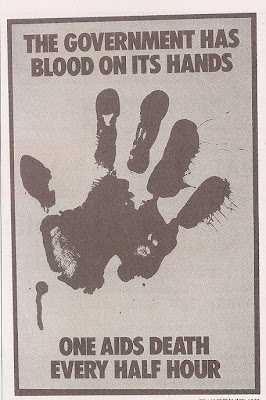 After the speeches the crowd decided we needed to make a bit more impact and so we started an impromptu march down Haymarket, determined to make as much noise as possible about the fact that we and our friends and lovers are being sentenced to death by poor healthcare and education. I was about to plunge into the centre of the crowd, which had stopped the traffic by sitting in the road, when I was suddenly shoved aside by a flying policeman. Reeling against the railings, I watched in amazement as uniformed bully-boys charged in droves, their faces contorted by fear and hate, down to where the protestors chanted ‘People with AIDS under attack -fight back!” Motor vehicles, filled no doubt with good citizens devoting themselves to the sacred ritual of shopping, beeped and shuffled forward. One bus drove inexorably into the crowd, acting as a convenient battering-ram for the police. People were snatching their loved ones out of the way. Like a drowning woman I saw my life flash before me and I recalled my part in supporting transport workers’ actions against low pay and poor safety standards. Where is that solidarity now? Is AIDS not a working class issue? Six police vans had by now screeched on to the scene at breakneck speed.

Now we all knew that the police were out to break up the demo without so much as a moment’s dialogue. Things moved very fast. Officers began shoving marchers on to the pavement. Many people were grabbed and wrenched from their friends and thrown violently into the back of the vans. A woman came towards me crying. She had just watched as a man was handcuffed from behind, thrown face down on to the road screaming and his head repeatedly smashed on to the tarmac. I and others stood helplessly and horrified by the side of the road, terrified to move as officers barged about arresting people brutally and sadistically. One man was arrested for a1legedly swearing at a vanload of police. As he was thrown like a sack of potatoes into the van, five or six policemen hurled themselves on top of him. We stood crying out as the door slammed shut and the van sped away. I myself was too scared to take photographs, fearing violence. I wish I had been brave enough; I wish we as a community knew how to fight back.

Twelve protestors were arrested, others assaulted, many more were hurt and bruised and everyone was terrorised. The attack was nothing more than a legal exercise in bashing the ‘queers’. At a time when murders of lesbians and gay men are reaching persecution proportions, it makes you wonder whether violence against lesbians and gays, Black people, drug users and people with HIV and AIDS will ever be treated seriously as crime. It’s particularly ironic that this event took place whilst ‘leaders’ of the lesbian and gay communities are trying to meet with the Metropolitan Police to appeal to them to protect us.

But the police arrest us for showing love and affection in public, for standing up for our rights, for trying to show people what we are suffering, and for trying to warn the public about the dangers of HIV infection. They shut us up, no questions asked. So when I read that we should explain to the police what we are going through, and ask for their help, I say: Who’s fucking listening?' 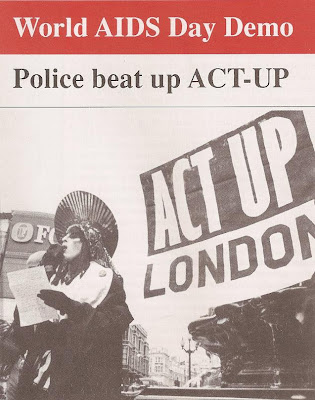