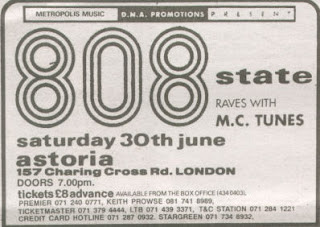 I'm not sure that central London gig venue The Astoria Theatre is still under threat - the fear that Derwent Valley Central (a property company) were about to demolish it seems to have evaporated, but Save the Astoria are still concerned about a possible threat from the Crossrail public transport project - apparently The Astoria Theatre could 'be demolished to make way for a worksite necessary for the construction of the new Crossrail station platforms and passages. That's right. Instead of the London Astoria, we get a hole in the ground. A building site.'

I support this campaign but I do have mixed feelings about the desire to conserve music spaces for the sake of it. Change in use of buildings is part of the urban dynamic, which sometimes works in favour of music and dancing. After all The Astoria would never have become a music venue if the pickle factory and later the cinema in the same building hadn't closed down. I've been to enough parties in converted or squatted banks, schools, offices and bus garages to appreciate the beauty of abandoned, empty and marginal spaces in which new possibilities can be created.

On the other hand, the rule of the market means that fluctuations in property values can lead to these kind of spaces being squeezed out leaving little room for music. For instance, all over London (and beyond), pubs are being converted to housing, and big new property developments being built with no space for socialising without the pressure to spend lots of money (i.e. lots of shops and restaurants, no scuzzy pubs). We need to hold on to room to live, to dance, to music, without turning the spaces that are left into some kind of music heritage theme park.

Image: 808 State ticket from the Astoria, 1990. Incidentally, coming out of Brixton tube in this period a ticket tout dropped a ticket for 808 State at the Academy. No sooner had I picked it up than another tout came up to me and offered to buy if off me - quickest money I ever made.

Posted by Transpontine at 4:28 pm