In 'And I Dance with Somebody: Queer History in a Japanese Nightclub' (History Workshop Journal, Autumn 2020), Mark Pendleton  reflects on queer spaces, drag and HIV activism (among other things) through the prism of  'a drag-based club night called Diamonds are Forever' which was launched in Kyoto in 1989 and is still going. Pendleton frequented the club while living there in 1998-9 and returned to it recently.
The club was started by the 'artist and activist Furuhashi Teiji, also known by his drag persona Glorias' who while living in 1980s New York  became part of 'the East Village’s burgeoning drag and gay scene centred on the Pyramid Club'. Back in Japan he started the club in Kyoto as well as being involved in 'the radical performance art collective Dumb Type, which challenged social norms around gender, sexuality and identity'.
Pendleton honours the club founders but also warns against 'a narrow focus on creation.. A scene is created, sure, and that act of creation is fundamentally important, but what is created is also experienced by participants, who may or may not be known to the creators themselves and who make those spaces their own through their acts of resistance, or their dance moves'.
In Japan and elsewhere, Pendleton argues, queer spaces can be 'A retreat from the heteronormative world outside. A place to grow into cultures and histories marginalized from that world. That flash of bliss that gives a sense of a future beyond those dull places that fettered us. And a damn fun night of dancing, as a political act in and of itself'.
The 1994 International AIDS Conference in Yokohama
Pendleton highlights the significance of the Tenth International AIDS Conference held in Yokohama in August 1994, a decade into the AIDS crisis and the first event of its kind held outside of Europe or North America. The conference was attended by 10,000 people from 140 countries, with researchers, clinicians, policy makers, community workers, activists and others gathered under the slogan ‘The
global challenge of AIDS: together for the future’.
Pendleton is critical of a framing of this conference as a culture clash between 'the conservative Japanese society and the western activists' (International AIDS Society), noting that it 'also featured Japanese artists and activists joining with those from elsewhere to remind scientists and policymakers that HIV positive people continued to live their lives through the crisis'. Specifically, Furuhashi and others involved with Dumb Type and Diamonds are Forever  intervened at the conference 'hanging red banners and hosting a party to reflect this insistence and the mechanism through which they understood that life could continue to be realized – collective acts of dancing and love. The AIDS acronym was stripped of its association with illness, stigma and death to become 'And I Dance with Somebody, accompanied by the slogans LOVE POSITIVE in English'.
I attended the Yokohama conference and the party mentioned here so it was great to see this documented, and I thought I would contribute my fading memories of this event and my small collection of documents related to it (I wish I'd taken more photos now of course - I did take some of Yokohama street art which I've featured here before)
'Love Positive' with its slogan 'And I Dance with Somebody' was a series of cultural events, including a Symposium involving the US art critic and ACT UP activist Douglas Crimp. The Love Ball was an evening event taking place in the Plaza in front of the Pacifico Yokohama International Convention Center, the main conference venue. The Ball was described as 'A party to conference participants and the general public' with 'appearances by Diamonds are Forever's drag queens from the Kyoto club scene'. 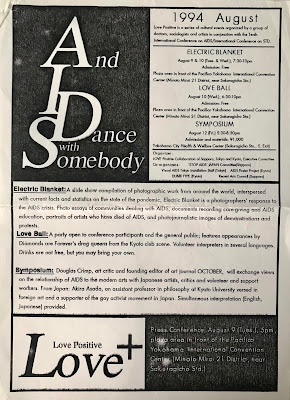 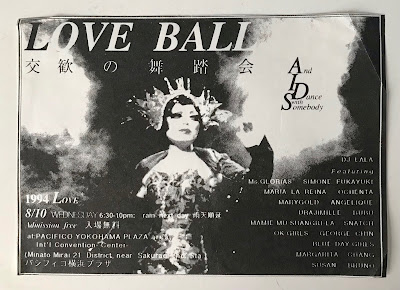 As I recall there were a few hundred people there. It wasn't the wildest party, starting as it did in daylight in the humid outdoors, but it was a striking departure from the conference format of endless presentations. The drag acts would certainly have disabused anybody with misconceptions about Japan being a homogenously conservative nation! Of course I was familiar with drag, but I guess the mainstream UK conception of it at the time was of men dressing up as versions of women. If I had to describe it now I would say in Yokohama it was people (who may have defined themselves as men, women or neither) dressing up in outrageous costumes that were beyond anything usually worn by anybody and in a sense beyond gender.
There was a kind of utopian energy, captured in the slogan on this postcard featuring OK Girls, one of the acts participating in the Love Ball: 'O Developed Nations of Desire! O Superpowers of Fantasy' . As described by Pendleton, Japanese slogans on the banners 'imagined a dissolution of binary divisions, whether HIV+/-, man/woman or citizen/foreigner: "I have a dream that my status disappears. I have a dream that my sex disappears. I have a dream that my nationality disappears"'. 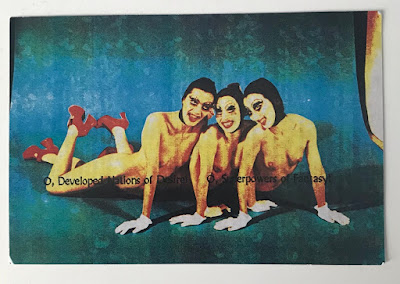 After the performances everyone was invited up on the stage where we danced to disco.
My encounter with the Kyoto crew was fleeting but it cheered me up, the conference itself was (understandably) a sober affair. At that point the World Health Organisation was estimating that 6000 people were being infected with HIV every day and that at least 17 million people had acquired HIV world-wide. Medical treatments had not progressed much beyond AZT, which had first been licensed in 1987. There was some positive news at the conference, such as a study that showed AZT could prevent babies being born with HIV to HIV+ mothers. But even the limited treatments available were out of reach of many in Sub Saharan Africa where the  majority of people living with HIV resided.  In her speech at the closing ceremony, 'Noerine Kaleeba from Uganda said that many young women there were asking why, if AZT was effective in reducing mother-to-child transmission, did they not have access to it' (quoted in Orr, Children, Families and HIV: The Global Picture, 1994).
It sometimes felt that such issues were as at risk of being sidelined in the increasingly professionalised AIDS industry of doctors, drugs companies and NGOs. Of course many of these people were doing good work and I was in the latter category myself. But there was a need for a strong activist challenge to put the lived experience of people with HIV at the forefront, and to maintain a sense of urgency.
There were some people in Yokohama from direct action group ACT UP, and they staged a protest at the closing ceremony focused on immigration restrictions on people living with HIV. New York activists reported that  'ten ACT UP members from New York, eight from Paris, and more than 100 members of Tokyo's OCCUR spearheaded several events during the week, including an unprecedented AIDS/coming out march in Yokohama on the opening day of the conference' (The Advocate, 15 November 1994)
OCCUR (Association for the Lesbian and Gay Movement, based in Tokyo) had established  'The Executive Committee for Learn from PWA and Minorities' in May 1994 and had spent the months leading up to the conference lobbying against immigration restrictions on people with AIDS, sex workers and drug users that would have prevented many people from attending the conference. While some flexibility seems to have applied for the conference, the Committee continued to argue against discriminatory immigration laws and that 'The fight against AIDS has no border and so efforts must be made to assure all PWA/H's [People with AIDS/HIV] freedom of international mobility and to encourage solidarity through global networking, cooperation and actions of community-based organisations'.
As well as discrimination against people with HIV, another big issue in Japan at the time was the blood products scandal. At least 1,000 haemophiliacs had been infected with HIV through blood products and those affected were taking legal action against the Government and drug companies for failing to take action when the risk was known. Japan did not switch to heat-treated blood products until more than two years after the US had taken this action.
With language barriers and time constraints I didn't engage with Japanese activists other than picking up their literature and attending the Love Ball. But with the visible presence of OCCUR, Love Positive and the large numbers of young people who acted as volunteers to help conference attendees, there was no sense that Japan was in need of enlightenment from outside. The issue of discrimination, including in relation to immigration, was one faced in most parts of the world.
I didn't do that much networking and socialising on my all too brief visit, I diligently spent my time in conference sessions as I was writing a report on it. I did meet some interesting people though, including hanging out with some folks involved in a HIV prevention project with young women sex workers on the German/Czech border (we went on a trip to see the Amida Buddha statue in Kamakura). With so many people present there must have been many connections made, some with lasting significance. For instance, a meeting in Yokohama led to the foundation of the Asian Pacific Network of Sex Workers.
[Mark Pendleton, a historian of Japan, is conducting research on the Yokohama conference, so I am sure would be interested in any memories or reflections - you can find him on twitter]
Posted by Transpontine at 8:56 am