My thoughts go out to the victims of the nightclub fire in Shenzhen, China this weekend:

Thirteen people have been detained in connection with a nightclub fire on Saturday that killed 43 people and injured 65. Wang Jing, owner of the club who could not be traced after the fire, surrendered to police Sunday afternoon. The general manager, deputy general manager, safety officer, technician and performers had been detained earlier.

Hundreds of people, most of them youths, had packed into the Wu Wang Club, popular as "King of the Dancers Club", in the city's Longgang district when the fire broke out around 11 pm. "We were watching a show and one of the performers lighted a firework, which rose to the ceiling that caught fire it spread rapidly across the hall," and turned into the worst fire tragedy in the southern city, a survivor surnamed Zheng said.

"Power supply to the hall was cut immediately, leaving the room in darkness, except for the light from the blaze I heard people shouting and crying everybody dashed for the only exit. I don't know how I managed to get out I felt like i was running on people's body but I couldn't see," the youth said. The nightclub, about 35 km from downtown, had a hall and 10 rooms that could hold 380 people. It was on the third floor of a second-hand goods' market, and could be accessed from the staircase only through a narrow passageway, about 10 m long (China Daily, 22 September 2008).

Sadly this is not unique, as a current trial in Argentina shows: 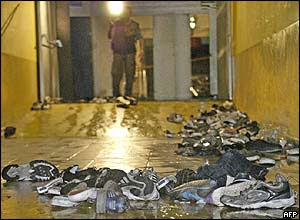 One of the biggest and most controversial trials in Argentine history has started in the capital, Buenos Aires. Fifteen people are accused of responsibility for a nightclub fire in December 2004 that killed 194 people, many of them youngsters... The 30th of December 2004 is a date etched firmly on Argentina's national consciousness. On that night, someone set off flares inside the Cromagnon nightclub, starting the huge fatal blaze, in which 1,500 people were also injured.

The images of the burnt bodies and choking survivors being dragged from the embers of the nightclub are as strong today as they were then.

In court, accused of responsibility for the tragedy, are the club's owner, members of the band the Callejeros who were playing that night, and policemen and local officials accused of taking bribes to overlook safety measures. The controversy surrounding the fire brought down the then Buenos Aires city government and led to tight security measures being imposed at venues across Argentina (BBC 19 August 2008)

At the time there were big demonstrations in Argentina:

Thousands have taken to the streets of the Argentine capital calling for the city's mayor to resign after a nightclub blaze... Some 5,000 people took part, many of them relatives and friends of the young people who died in the blaze. As night fell, they gathered outside the Cromagnon nightclub, destroyed when fire engulfed the building a week ago. The protesters demanded those who they believe are responsible, including the club's owner, be held to account...The club was reported to have been filled beyond its capacity and some of its emergency exits were said to have been locked (BBC, 7 January 2005).

I am reminded too of the December 2000 fire in in Luoyang, China in which 311 people died, and of the Stardust disco fire in Dublin in February 1981, in which 48 people died, prevented from fleeing the fire by locked fire exits and barred windows. Christy Moore wrote a song about this, They Never Came Home, which was banned in Ireland for libel. Moore's line 'Hundreds of children are injured and maimed, And all just because the fire exits were chained' is a reminder that while accidental fires will happen, it is security systems designed to maximise profit by restricting entry and exit that stop people escaping them.
Posted by Transpontine at 9:27 pm