The Hyperdub night at Corsica Studios (Elephant & Castle) was excellent on Saturday, with two awesome live appearances. Kode9 and Spaceape were intense, but due to moving around, saying hello to folks and then being squeezed to the back, I only caught the latter half of the set. I was luckier for King Midas Sound - squeezed at the front instead - and they were outstanding on their first London gig. The project is a collaboration between Kevin Martin (of The Bug fame), Roger Robinson and Hitomi.

Must admit I did think of early Massive Attack when they were playing, something which Jonny Mugwump has already criticised (see link below). It's not so much that they particularly sound like Massive Attack, but in some ways there's a similarity of approach. On the first Massive Attack album they magnificently filtered the then current state of dance music (including hip hop) through a UK reggae sound system sensibility. King Midas Sound do something similar, except in the interim there's a whole lot of other stuff that's been added to the mix, from techno to dubstep. The KMS album is out next week, and not having heard it I don't want to overdo the hype, but on the evidence of the live show there is potential for it to have a similar impact to that first Massive Attack album as a sonic landmark that crosses over to a wider audience.

There's a couple of good new KMS interviews out there - John Eden at FACT and Jonny Mugwump at The Quietus). 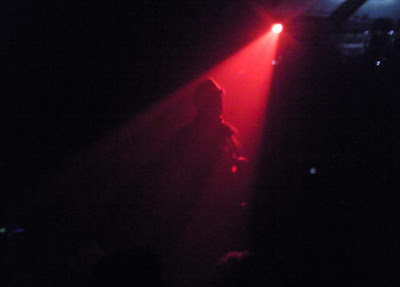 (photo - Roger Robinson under the spotlight on Saturday)

Corsica Studios is located in a railway arch directly underneath Elephant and Castle station so joins the list of great railway arch clubs which I will eventually get round to writing about. Two good-sized rooms with nice sound system plus a bar overlooked by a picture of Dickie Davies (yes really). At the back there's a covered outside area shared by the other railway arches, including La Provincia, a Latin America club frequented mainly by Colombians. Thanks to a Spanish speaking member of our party we ended up in there for a while too.

As someone who is always as fascinated by the crowd and dance styles as the music when I go out, it was interesting to compare the two. Dress codes weren't that dissimilar - jeans and t-shirts predominating, though a bit smarter in La Provincia. Gender balance was similar too - fairly evenly matched, but with more men than women. Hyperdub though was very crowded, whereas in La Provincia people were sitting round tables.

And the dancing was very different - in La Provincia it was exclusively salsa dancing couples, whereas in Corsica there wasn't room for much more than nodding heads, shuffling on the spot, and hands in the air for the more enthusiastic. At Hyperdub a lot of the dancing was in rows facing the front, which means people are mostly looking at the back of the person in front of them. Understandable for a live performance, but something I have never really understood when it's just a DJ. I don't think I ever saw this before the 'superstar DJ' boom in the late 1990s, in fact I distinctly remember noticing it for the first time at the famous 1999 Armand Van Helden vs. Fatboy Slim clash where they DJed in a boxing ring in the middle of Brixton Academy. Not proposing that people should start trying out strict tempo Latin moves to dubstep - though that might be fun - but there is something to be said for shifting the balance back from the DJ to the dancefloor as the centre of attention.

Anyway just some thoughts rather than criticisms, it was a good night enlivened even more by this sense of these different dance worlds coexisting in time and space in a corner of South East London. 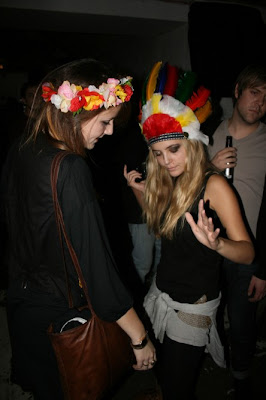 Some more reviews of the night: Uncarved, Yeti Blancmange, Vice Magazine (from where this Moses Whitley photo comes).

Posted by Transpontine at 9:41 pm