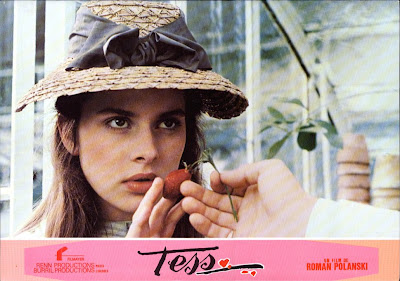 'It was a fine September evening, just before sunset, when yellow lights struggle with blue shades in hairlike lines, and the atmosphere itself forms a prospect without aid from more solid objects, except the innumerable winged insects that dance in it. Through this low-lit mistiness Tess walked leisurely along...

Approaching the hay-trussers she could hear the fiddled notes of a reel proceeding from some building in the rear; but no sound of dancing was audible -an exceptional state of things for these parts, where as a rule the stamping drowned the music. The front door being open she could see straight through the house into the garden at the back as far as the shades of night would allow; and nobody appearing to her knock she traversed the dwelling and went up the path to the outhouse whence the sound had attracted her.
It was a windowless erection used for storage, and from the open door there floated into the obscurity a mist of yellow radiance, which at first Tess thought to be illuminated smoke. But on drawing nearer she perceived that it was a cloud of dust, lit by candles within the outhouse, whose beams upon the haze carried forward the outline of the doorway into the wide night of the garden.
When she came close and looked in she beheld indistinct forms racing up and down to the figure of the dance, the silence of their footfalls arising from their being overshoe in "scroff"--that is to say, the powdery residuum from the storage of peat and other products, the stirring of which by their turbulent feet created the nebulosity that involved the scene. Through this floating, fusty debris of peat and hay, mixed with the perspirations and warmth of the dancers, and forming together a sort of vegeto-human pollen, the muted fiddles feebly pushed their notes, in marked contrast to the spirit with which the measure was trodden out. They coughed as they danced, and laughed as they coughed. Of the rushing couples there could barely be discerned more than the high lights - the indistinctness shaping them to satyrs clasping nymphs - a multiplicity of Pans whirling a multiplicity of Syrinxes; Lotis attempting to elude Priapus, and always failing.
At intervals a couple would approach the doorway for air, and the haze no longer veiling their features, the demigods resolved themselves into the homely personalities of her own next-door neighbours. Could Trantridge in two or three short hours have metamorphosed itself thus madly!
She did not abhor dancing, but she was not going to dance here. The movement grew more passionate: the fiddlers behind the luminous pillar of cloud now and then varied the air by playing on the wrong side of the bridge or with the back of the bow. But it did not matter; the panting shapes spun onwards.
They did not vary their partners if their inclination were to stick to previous ones. Changing partners simply meant that a satisfactory choice had not as yet been arrived at by one or other of the pair, and by this time every couple had been suitable matched. It was then that the ecstasy and the dream began, in which emotion was the matter of the universe, and matter but an adventitious intrusion likely to hinder you from spinning where you wanted to spin'.
(Thomas Hardy, Tess of the D'Urbevilles, 1891) 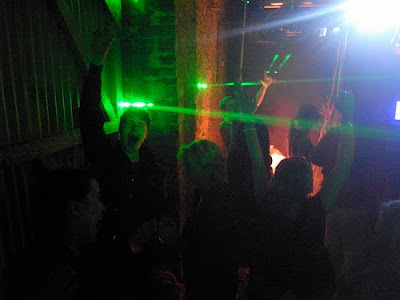 (Pictures - top, Nastassja Kinski in the 1979 film version of Tess; bottom, people dancing in a barn in Dorset 2008 by Caiusp at Flickr)