Next up with a Dancing Questionnaire it's Georgina/infinite, artist, photographer and the South London bassnik responsible for Drumz of the South and much else besides. Another respondent who I haven't yet met but whose path has crossed mine - in this case as recently as last Saturday night when somebody said to me 'Georgina's here somewhere...'

1. Can you remember your first experience of dancing?
Not specifically, but I have vague memories of dancing at family parties and weddings and of winning a primary school competition with friends doing "The Locomotion."

2. What's the most interesting/significant thing that has happened to you while out dancing?
Nothing specific, but generally,all the amazing and interesting people that I've met and photographed on dancefloors in London and around the world. Dance has definitely changed my life.

3. You. Dancing. The best of times…
Very stoned and deep in a trance at Forward>> or DMZ; I used to particularly love dancing to Youngsta. Dancing on a bar in Paris on a college trip. Dancing to I Feel Love at home when I should've been doing the housework. In a House tent at Secret Garden Party Festival in 2007 with my friend Breezy. It was pretty wild. I can't say much more about it!!

4. You. Dancing. The worst of times…
Having my camera stolen at a gig cos I was drunk, dancing and careless. :(
Generally getting toes trodden on by stiletto's or bum pinched by stupid men!

5. Can you give a quick tour of the different dancing scenes/times/places you've frequented?
1996-99 (aged 15-18) I'm not afraid to admit it....The Blue Orchid and Metropol in Croydon- under 18's, over 18's dancing to garage in high heels! I would take them off at the end of the night and walk to Crazy Chicken for a burger and chips with sore feet and blackened soles.

1999-2001 (aged 18-20) Beautiful People at Metro in Oxford Street and various Rock/Metal concerts where I really learnt to dance.

Also plenty of festivals and carnival over the years! 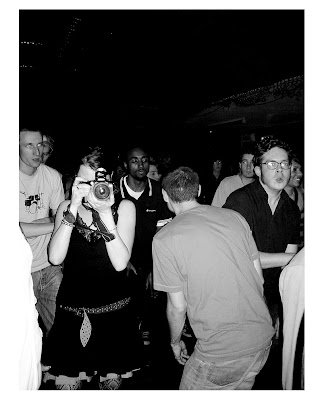 6. When and where did you last dance?
The Dodo's gig at The Scala last Monday evening.

7. You're on your death bed. What piece of music would make your leap up for one final dance?
I can't choose between Donna Summer's 'I Feel Love' or 'Red' by Artwork.

All questionnaires welcome - just answer the same questions in as much or as little detail as you like and send to transpontine@btinternet.com (see previous questionnaires).
Posted by Transpontine at 6:00 am