Last week I took part in Border Infection, an event at Goldsmiths in New Cross themed around borders, migration and creativity. My contribution was to lead a radical history walk/talk around New Cross and Deptford. In the evening there was a party at the Amersham Arms, with the highlight a great DJ set by Ges-E and Osmani Soundz from Nasha records (Eastern-flavoured bassism). I also played a set, in effect a soundtrack after the fact to the walk, featuring music linked to the area - specifically stuff that could be placed on a loose South London bass continuum from 70s reggae to current UK funky. Here's my selection:

1. TT Ross - Imagine: released on Dennis Harris's Lovers Rock in 1978, the label that named a whole genre of soulful reggae. The label was based in Harris's studio at 13 Upper Brockley Road, SE4. 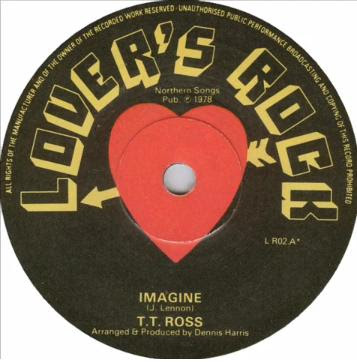 2. Johnny Osbourne -13 Dead: this and the next four tracks all relate to the 1981 New Cross Fire, when 13 young black people died in a house fire at 439 New Cross Road.

3. Sir Collins and His Mind Sweepers - New Cross Fire: Sir Collins - or Charlie Collins -was involved in the famous Four Aces club in Dalston. His son was DJing at the New Cross party and died in the fire. I have added a sample from a BBC news report in January 1981.

4. Roy Rankin & Raymond Naptali - New Cross Fire (1981): I have added a sample of Sybil Phoenix discussing racism in late 1970s and the setting up of the Moonshot Club in New Cross, youth club for young black people and scene of mass meetings in the aftermath of the fire.

6. Benjamin Zephaniah - 13 Dead and Nothing Said.

9. Brinsley Forde - Can't tek no more of that - the sound of the closing scene of the great reggae sound system film Babylon, shot around Deptford and Brixton in 1979.

10. Dizzee Rascal - Can't tek no more - he's from East rather than South East London, even if his career took off via a Deptford studio, but since this track from last year's Tongue'n'Cheek album samples Babylon it's on the list.

11. Southside Allstars - Southside Riddim - this and the following two rap tracks offer a gritty realist take on South East London life, doing their bit to undermine gentrification by reminding everybody that the area has gangs and violence as well as estate agents!

15. Kyla - Do you Mind: a bit of an obvious funky anthem I know, this comes via Digital Holdings, the New Cross studio used by producers Crazy Cousinz. There's a continuity between Lovers Rock and UK Funky I think, expressing the soulful current of London bass culture as the flipside to the dread, beat an' blood current.

16. Leslee Lyrix - a short extract from the 1983 Ghettotone vs. Saxon sound system clash at Lewisham Boys Club, featuring Leslee Lyrix as Ghettotone MC. In his other guise as Dr William (Les) Henry he has published an essential book about sound system culture, What the Deejay Said: A Critique from the Street. Overlaid on this are samples from a short film, Voice for the Voiceless, made by some Goldsmiths students in 2008, with Les Henry and Les Back discussing the significance of sound systems and specifically nights in the Crypt at St Pauls in Deptford. I had a small role in this film, mainly supplying them with the soundtrack after a drink with the film makers in the New Cross Inn.


Voice for the Voiceless Uploaded by nickstreet83.

[the sound quality on the mix is variable, some of it ripped from vinyl and cassette and then thrown together on Audacity, but hope you'll agree that the content is all good... Also posted at Transpontine. Previous Agitdisco mix here]

Posted by Transpontine at 8:57 pm

Looks great! Thanks for posting the film also :-)