If one threat to music venues is over-regulation through increasingly onerous licensing laws, another is gentrification. As land and property values rise, spaces of conviviality (pubs, bars, clubs) are often swept away by developers to be replaced by upmarket residential and retail buidings. In London, the clearest example is The Foundry in Shoreditch, facing demolition to make way for a hotel.

City of Strangers notes a similar case from New York, where Freddy's Bar in Brooklyn is facing demolition to make way for the huge Atlantic Yards Development. City of Strangers 'started hanging out in the very late 90’s, when I still lived in Fort Greene. It was nice having a good bar in walking distance. In those pre-hipster days, there weren’t many bars in Brooklyn with found video loops broadcast on a TV over the bar, or that played the whole Velvet’s Banana album or the Ramones or 80’s British punk. The back room featured everything from hardcore to experimental jazz'.


If the developers get their way, 16 high rise buildings will soon replace not only Freddy's but a whole neighbourhood, including many pesky low rise buildings with controlled rents. Freddy's patrons - some pictured below -have threatened to chain themselves to the bar to block its eviction. 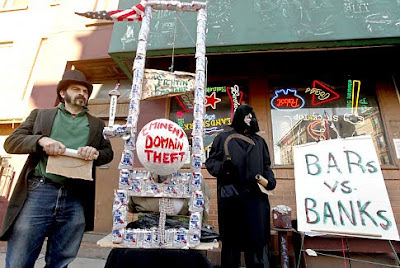