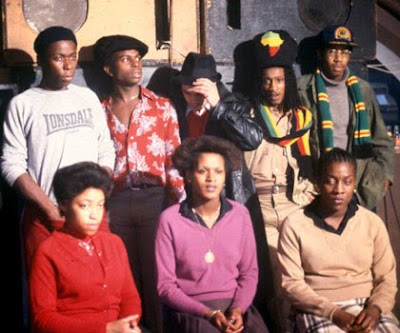 Franco Rosso's 1980 film Babylon returned to its South London roots with a showing at the Deptford Albany this week:
'In Babylon, the racist brutality of the streets is contrasted with the (intimately shot) spaces of respite where black people come together - sound system nights, engagement parties, churches and Rastafarian gatherings. In all of these sanctuaries music is central. It may not offer magical protection - the tensions of survival still explode along the competitive edge of the soundclash - but it inspires and acts as a rallying point. The film ends with the sound systems hastily packing up as the police raid, leaving Blue standing firm and chanting over the closing credits; 'Babylon brutality, We can't take no more of that.'

Babylon is an important social document, but it would be a mistake to view it as a straightforward representation of reality. It is after all a story, and just as the sharp eyed will spot some of the editing tricks (people skipping between locations shot in Brixton and Deptford in the course of a single scene) those who were there at the time will no doubt have their own take on the accuracy of the film's characters and dialogue.

But at the very least it directly connects, via the real people and places it includes, with the lived histories of the period. A time when the National Front was confronted as it marched through New Cross (1977), and when both the Moonshot (1977) and the Albany (1978) were set ablaze in suspected fascist arson attacks' (more here on its SE London locations)
Posted by Transpontine at 7:50 am