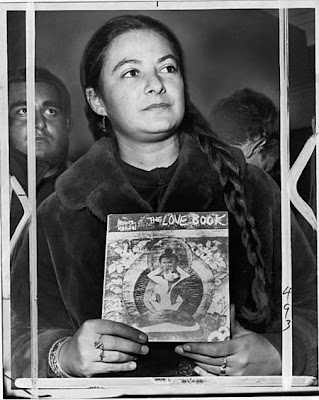 San Francisco Chronicle reports the death of Lenore Kandel, belly dancer, beat poet, Digger and radical:
'Lenore Kandel hung out with Beat poets and was immortalized by Jack Kerouac, wrote a book of love poetry banned as obscene and seized by police, and believed in communal living, anarchic street theater, belly dancing, and all things beautiful...
"I met Lenore in 1965 at a citywide meeting of artists opposed to the war in Vietnam," said actor Peter Coyote. "Lenore was physically beautiful and physically commanding. She had this voluptuous plumpness about her and an absolute serenity." Coyote, Ms. Kandel and her then-boyfriend Bill Fritsch - a poet and Hell's Angel - became fast friends. "She was working as a belly dancer and would sew these beaded curtains to make money on the side," said Coyote, a founder of the Diggers, an anarchistic group supplying free food, housing and medical aid to the needy in San Francisco. "We would sit around and smoke dope and talk about philosophy and art. She was an enlightened person, a great being...
Her book of poetry "The Love Book," published in 1966, was deemed pornographic and the famed Psychedelic Shop on Haight Street where it was sold was raided by the police. Copies were confiscated on the grounds that their display and sale "excited lewd thoughts" and the store's owners were arrested'. (Read more)
One of her 1960s Digger episodes is recalled here (Marx Meadow is in San Francisco's Golden Gate Park):
'So one time, Lenore Kandel thought it would be the greatest idea in the world to hang 500 sets of glass, Chinese chimes in every bush around Marx Meadow -- that if we did that, people would discover them, take them home with them, play them and be entertained and felt elegant for the event. So, we went in and asked Tosh for 500 sets of Chinese chimes. He said, "Sure. Just take them."... And Lenore spent hours stringing them up in the trees'.
Posted by Transpontine at 8:57 am