Look on my works, ye Mighty, and despair 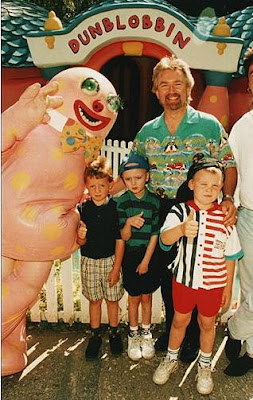 I met a traveller from an antique land
Who said: Two vast and trunkless legs of stone
Stand in the desert. Near them, on the sand,
Half sunk, a shatter'd visage lies, whose frown
And wrinkled lip, and sneer of cold command
Tell that its sculptor well those passions read
Which yet survive, stamp'd on these lifeless things,
The hand that mocked them and the heart that fed.
And on the pedestal these words appear:
"My name is Ozymandias, king of kings:
Look on my works, ye Mighty, and despair!"
Nothing beside remains. Round the decay
Of that colossal wreck, boundless and bare,
The lone and level sands stretch far away. 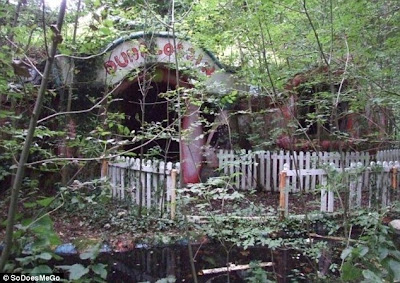 The abandoned ruins of Mr Blobby theme park after ravers trash site (Daily Mail, 14 October 2009)
'He attracted nearly 17 million television viewers at the height of his fame, and even had a number one hit, but today Mr Blobby's empire is a mere shadow of what it once was. New images of what was the Mr Blobby theme park in Somerset show a depressing ruin covered in weeds and trashed after all-night raves. The park closed its doors in 1999, after the popular Saturday night television show Noel's House Party on which Mr Blobby featured was axed by the BBC. Now in a state of total disrepair, buildings are covered in moss, while windows and furniture lie broken after all-night raves that take place on the site. The entrance to Mr Blobby's home, named 'Dunblobbin', is surrounded by dead trees and a carpet of decaying leaves'
Same story in The Sun:

'The home of kids' telly favourite Mr Blobby lies in ruins - reduced to a waterlogged wasteland. Excited youngsters once flocked to the Blobbyland theme park to see the make-believe cottage of Noel Edmonds' famous character. Now it is more like Soggyland - overgrown and strewn with fallen leaves and mud. The house, named Dunblobbin, and its gardens opened in 1994 in Cricket St Thomas, near Chard, Somerset. But it closed after two years as fans lost interest. Since then, ravers have used it for all-night parties. Doors have been ripped off, windows and furniture smashed, mattresses burned and the interior wrecked (The Sun, 14 October 2009)

For readers lucky enough not to have been exposed to Mr Blobby, 'he' was an ubiquitous 1990s British TV phenomenon, a pink thing launched on an unsuspecting public by Radio DJ and TV presenter Noel Edmonds (the two of them standing with those poor kids in the top photo). The Daily Mail's attempt to put a 'broken Britain omg ravers are out of control' angle on this is absurd - the place has been abandoned for ten years so of course it's in decay - but I like the idea of people partying in the ruins of '90s TV culture. Both papers seemed to have sourced the story from a blog - a blogger called Captain Stealth is quoted - but I can't find any trace of the original blog post via Google. Anybody know where it is?


(Thanks to John Eden for spotting this)
Posted by Transpontine at 6:36 pm

Sorry, but at what level was that vile toss-pot ever 'mighty'?

well I guess he thought he was! Like the other forgotten bloke with the statue in the desert.

Yeah, true. It is only us who thought FUCKING TWAT. In his own mind, he is clearly a cosmic avatar or somesuch.

Brilliant. These people deserve a medal.

Note that the tabloids are astonished that some chipboard'n'glue sheds that haven't been occupied or still less maintained for 13 years in a north-west European climate are falling down. Must be the ravers, eh.

Also, kids didn't "flock" to the place; it shut down after a bit less than two years because it was such a turkey.