War dances are well-known, but what of peace dances? The above photo, taken in 1905, show a peace dance in the Andaman islands. An account of the dance states that 'fighting was male business, making peace the women's task':
'the dancing ground is prepared, and across it is erected what is called a koro-tsop. Posts are put up in a line, to the tops of these is attached a length of strong cane, and from the cane are suspended bundles of shredded palm-leaf (koro). The women of the camp keep a look-out for the approach of the visitors. When they are known to be near the camp, the women sit down on one side of the dancing ground, and the men take up positions in front of the decorated cane. Each man stands with his back against the koro-tsop, with his arms stretched out sideways along the top of it. None of them has any weapons.
The visitors, who are, if we may so put it, the forgiving party, while the home party are those who have committed the last act of hostility, advance into the camp dancing, the step being that of the ordinary dance. The women of the home party mark the time of the dance by clapping their hands on their thighs. I was told that the visitors carry their weapons with them, but when the dance was performed at my request the dancers were without weapons. The visitors dance forward in front of the men standing at the koro-tsop, and then, still dancing all the time, pass backwards and forwards between the standing men, bending their heads as they pass beneath the suspended cane. The dancers make threatening gestures at the men standing at the koro-tsop, and every now and then break into a shrill shout. The men at the koro stand silent and motionless, and are expected to show no sign of fear.
After they have been dancing thus for a little time, the leader of the dancers approaches the man at one end of the koro and, taking him by the shoulders from the front, leaps vigorously up and down to the time of the dance, thus giving the man he holds a good shaking. The leader then passes on to the next man in the row while another of the dancers goes through the same performance with the first man. This is continued until each of the dancers has "shaken" each of the standing men. The dancers then pass under the koro and shake their enemies in the same manner from the back. After a little more dancing the dancers retire, and the women of the visiting group come forward and dance in much the same way that the men have done, each woman giving each of the men of the other group a good shaking. When the women have been through their dance the two parties of men and women sit down and weep together. The two groups remain camped together for a few days, spending the time in hunting and dancing together, presents are exchanged, as at the ordinary meetings of different groups. The men of the two groups exchange bows with one another'. 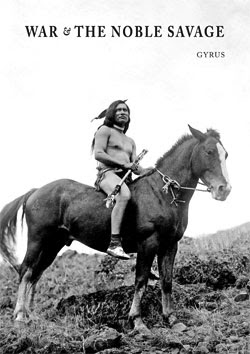 I came across the photograph, and mention of the Andamanese peoples, in 'War and the Noble Savage: A critical inquiry into recent accounts of violence amongst uncivilized peoples', a copy of which I picked up from the author (Gyrus of Dreamflesh) at last weekend's anarchist bookfair in London. The book provides an overview of the debate about the extent of violence amongst so-called primitive people, the two poles of which are often taken to be the notion of the noble savage living peaceably in the state of nature (attributed to Rousseau) and the notion of the state of nature as a war of all against all from which the development of the state saved humanity (attributed to Thomas Hobbes). One of the first tasks Gyrus undertakes is to question whether Rousseau and Hobbes really did hold these views, concluding that both were undertaking political-philosophical thought experiments rather than describing actual societies. Nevertheless the question continues to be very much a live one for anthropologists and others.
The conclusion is that it is impossible to be conclusive about many different societies spread over the world and many thousands of years. Nobody who has seriously looked at the matter suggests that hunter-gatherer societies have been violence-free - the anthropologist Donald E. Brown includes conflict and 'male coalitional violence' on his list of Human Universals observed in all known human societies. However Brown also includes co-operation and mediation of conflict on this list (as well as music and dance incidentally). The balance between war and peace seems to often been as much a function of environmental factors, such as resource shortages, as of the form of social organisation. Gyrus is sceptical of an over-romantic description of 'primitive' life, but sympathetic to the view that active warfare is comparatively rare in small hunter-gatherer groups characterised by egalitarianism and face to face decision-making.
So if life in the Paleolithic wasn't so bad, why did most of humanity settle down into sedentary lifestyles? Gyrus quotes from Steven Mithen's discussion of the Natufian people of the Middle East, believed to have been one of the first groups to give up hunter-gathering some 12,000 year ago:
'It is possible that the Natufian... people were prepared to suffer the downside of village life... to enjoy the benefits. Francois Valla... believes that the Natufian villages simply emerged from the seasonal gathering of the Kebaran people. He recalls the work of social anthropologist Marcel Mauss who lived with hunter-gatherers in the Arctic at the turn of the century. Mauss recognised that periodic gatherings were characterised by intense communal life, by feasts and religious ceremonies, by intellectual discussion, and by lots of sex. In comparison, the rest of the year, when people lived in small far-flung groups, was rather dull',
So perhaps it was our taste for partying, for large scale sociability and conviviality ('intense communal life'), that led most of the human species into the decidedly double-edged adventure of civilization, agriculture, states and urbanisation. In any event, there's no going back to hunter gathering for most of us - but as Gyrus concludes the existence of such societies can still 'inspire new stories of human potential'.
The book is available here for £4; Gyrus is launching the book with a talk tomorrow night (Tuesday 27 October) at the October Gallery in London.
Posted by A2 at 8:26 pm