Look at Life: In Gear is a 1967 news clip from the Rank Organisation offering a quick tour of the fashion boutiques of Kings Rd, Soho and Carnaby Street in 'Swinging London' - although the narrator actually states: 'They say London swings. It doesn't. Not even the Kings Road, Chelsea. But here and there among the conformist fat crowds is a lean cat or two, looking like it might swing given some encouragement'.

Places featured including Granny Takes a Trip (pictured), I was Lord Kitchener’s Valet (‘one way of saying no to authority is to parody it ... buy uniforms of the past to affront the uniformity of the present’) and Biba, all seemingly offering ‘an escape from the H-Bomb, television and other horrors of the workaday world'. Not only that but the ‘soft, music-loud caverns of the avant-garde can be misleading for they are the work cells of revolution’ – though the revolution in question is not a reference to the social/political turmoils of the period but to a shift in the fashion industry, with boutiques generating style rather than simply offering diluted versions of haute couture originals. 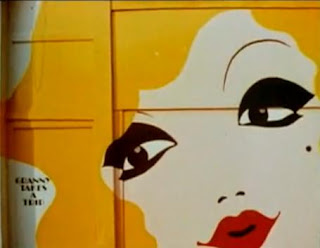 There's also some footage of people dancing - ‘the in-scene of London is one big fancy dress ball… a super charade of happy happenings... what gear the cats are wearing is one story where they wear it is another'. Frustratingly it is not clear exactly which clubs are featured in the film out of those mentioned as ‘the in gaffes where they go’ - including Tiles, Bag o’Nails, Samantha's, Georgie's and the Saddle Room. 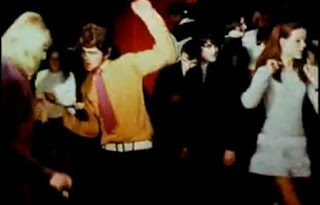 (full transcript at V&A website)
Posted by Transpontine at 6:00 am