'The Night will not be Silenced' - Myanmar punks oppose the coup

Mass resistance to February's military coup is continuing in Myanmar, with more than 500 people killed as soldiers and police open fire on protestors. Among those taking part are members of the country's punk community. According to Myanmarmix:

'Myanmar bands The Rebel Riot, Kultureshock, The Outcast and The Slingshot, as well as several international bands, have formed a collective called Cacerolazo – the Spanish word for “casserole” and a form of protest popularized in 1971 when women banged empty pots on the streets to demonstrate against food shortages in Chile... the practice of clattering pots and pans is associated with exorcising evil in Myanmar and it has been deployed nightly to show disgust at the junta, which seized power from an elected government on February 1. Cacerolazo’s “The Night Will Not Be Silenced” pays homage to the noisy protest along with the people who have been killed by security forces since the coup

“The voracity with which people crash their wooden spoons against their dented and deformed pots and pans is a daily reminder of the solidarity of the people against this regime," said a member of the band who asked for anonymity. “We wanted to share in this unity by bringing people together from across the Yangon punk community to write and record our own raucous din.”

Listen out at the end of the song for “Kabar Ma Kyay Bu” or “We Won’t Forget Until the End of the World” – a revolutionary song adapted from Kansas’ 1977 classic “Dust in the Wind” that became emblematic of the 1988 uprising and has also been widely sung since the coup'.

'Thousands of millions of people/An explosion of opposition/Very determined minds/ Oppose the perpetrators of the coup/Widespread everywhere/The sound of pots and pans/A song for freedom/Drive out the fascists... pull your head out of the sand/can you hear the pots and pans... the night will never silence this song'. You can download/donate here: https://cacerolazo.bandcamp.com/ 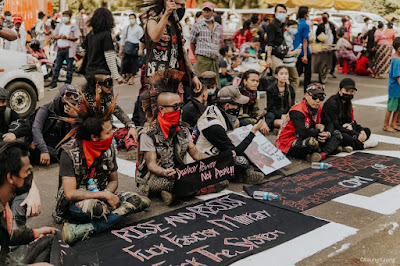 Yangon band The Rebel Riot have released a track with the universal slogan on A.C.A.B. They say: 'We, Rebel Riot are furious with the current injustice and brutality of police towards peaceful protestors. We are protesting in anyway we can on ground and with our creation through music with our music video ACAB. This video is not merely a song. We are portraying their violence through this video. We hope our music video will help this revolution as a part' (see video on youtube).  The lyrics include: 'Behind the slogan of "May I help you", Lies the violence faced by detained civilians under the coup. We have no faith in the justice system.  Disgusting police. F**K the Police! A.C.A.B'. 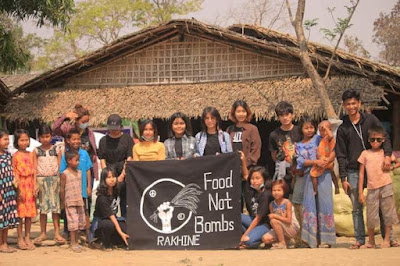 The punk community's Food Not Bombs projects have continued to be active since the coup, distributing food to those who need it most. According to their facebook group (18 March), one of their activists was recently hospitalised in the represssion:

'Our friend Japan Gyi (Nickname) is 24 yrs old and he is from our community. He is a musician and has been an active volunteer of Food Not Bombs. He is the vocalist of band Outcast.

Since Feb 1 coup, all of our people from the community have been feeling angried towards the coup. We have been protesting from the start with the crowd and it was a peaceful protest at the start. After a while, they have been cracking down the protest violently by arresting people, beating people and killing people. Deaths of protestors has been increased day by day. Despite the violence caused by junta, people have not   been stopping the protest and still protesting in any way they can .

Hlaing Thar Yar is a township full of factories and many working class people across the country resides. The junta has been oppressing Hlaing Thar Yar more than any other townships to protect China factories. On March 14,Japan Gyi participated on the protest in Hlaing Thar Yar. In the afternoon,many soldiers and police arrived to crackdown the protest. In the evening, they started the crackdown by using tear gas, rubber bullets and live rounds. More than 50 people died and many injured. Japan Gyi got wounded with a bullet (possible rubber bullet) on his right arm and he got a fractured bone. He was sent to the nearest hospital and put in a  cast. His arm condition is still not in a good shape. Our community is worried for his current condition. He is not just a vocalist but also have a hobby for instruments and can play bass, drum and guitar. He is an important youth for our community and has been participating delivering food with Food not bombs. We are all praying for his hand to be back to normal. We need support for his family. We hope he will be back with us soon'. 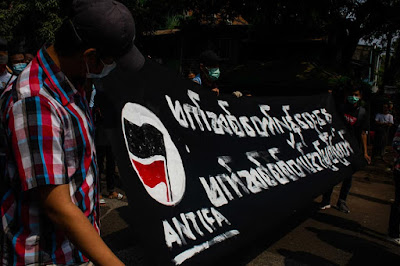 One small way you can support this community is by paying to watch the Myanmar punk film 'My Buddha is Punk' on Vimeo, all proceeds of which are currently going to Food not Bombs and the Rebel Community

[thanks to Stefan Szczelkun or the heads up on this]

Posted by Transpontine at 8:04 am

Well thanks for doing proper write up on it!
It is amazing to see that punk culture is 'still' such a vital force for good. I mean it seems to have gained in militant virtue without loosing its radical edge, as it has spread globally.

I think the same may be true for 'hip hop' (how quaint does that sound!) from the bits I pickup.

We can translate it and then link it to your site.
I think it's pretty interesting.
Best regards.