Well yes, I'm a bit slow off the mark in posting up these pictures from the demonstrations around the G20 summit of world leaders in London at the beginning of April. Not having much original to say about it all my intention was just to document some of the diverse musical forms on the protests, a project that seemed a bit facile after Ian Tomlinson was killed by the police on 1st April.

Still here they are. Most of the photos are from Put People First March for Jobs, Justice and Climate, a diverse demonstration of at least 35,000 people in central London on Saturday 28th March: 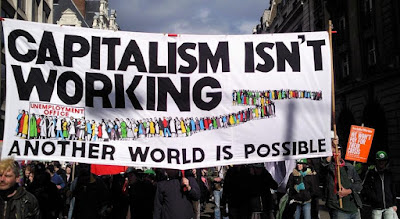 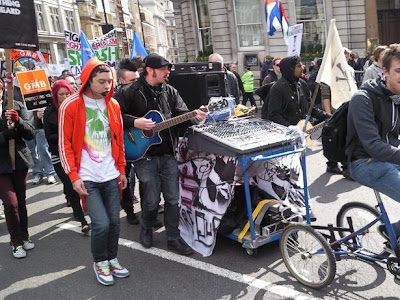 A mobile sound system with pretty impressive mixing desk, the guy on the left was rapping through a headset microphone 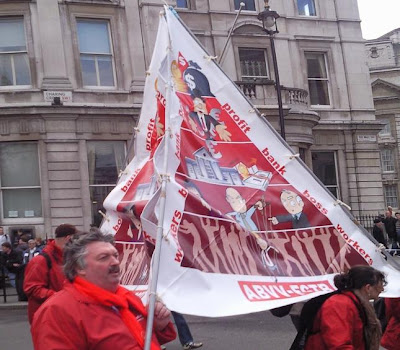 Belgian workers on the London demo 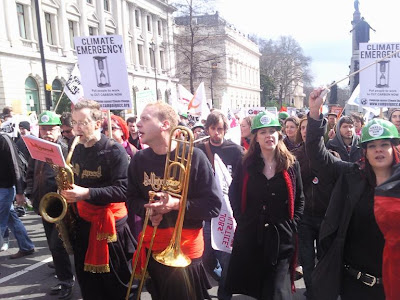 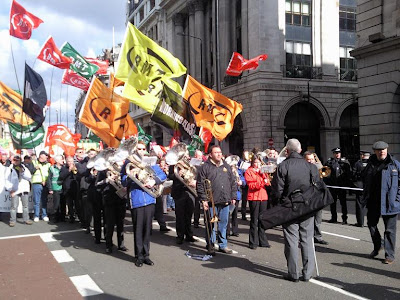 Old school brass band with the RMT (railworkers union)
Then on April 1st I headed into the City for the G20 Meltdown protest at the Bank of England, where my main concern was avoiding being surrounded by police and prevented from coming or going for several hours (ye olde 'Kettling' technique). Apparently Billy Bragg , Kate Nash and Get Cape, Wear Cape, Fly did a few acoustic numbers for the crowed, but I didn't see them or Enter Shikari's Roughton 'Rou' Reynolds who was apparently there. 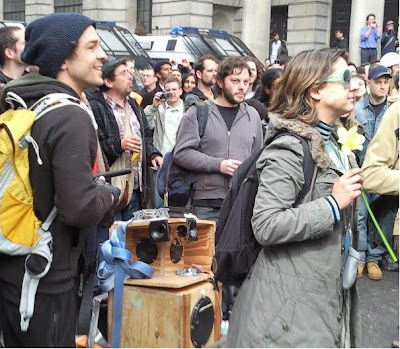 This mobile sound system was stopped by the police from joining the crowd outside the Bank of England - until it started playing gabba and suddently the police line parted! (probably only to widen the cordon mind).
Didn't find either of the actions particularly inspiring, but for all their limitations I guess I feel that some kind of movement is better than none. The long history of deep capitalist crises demonstrates that without a strong counter-movement the cost of recovery will be paid by those of us enduring pay cuts, job losses and reductions in public services - if not worse.
For some really deep history of the current crisis, take a look at David Graeber's 'Debt: the first five thousand years' in the new issue of Mute magazine (also available online at their site)
Posted by Transpontine at 7:55 pm