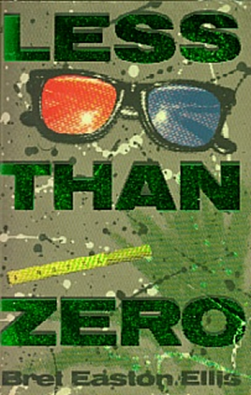 Less than Zero (1985) by Brett Easton Ellis is, as everybody knows, a study in nihilism set among the young, bored and wealthy in 1980s Los Angeles. A lot of time is spent hanging out in clubs and bars. I'm not sure if any of the places Ellis mentions were real clubs, or based on real places (anyone know?), but there are some good descriptions of feeling pretty vacant in nightclubs.
Clay (narrator/main character) visits The Land’s End on Hollywood Boulevard:

'From the back door you walk into the club like you're walking into a cellar and it's dark and like a cave with all these partitions separating the club into small areas where groups huddle in the darkness... Before I can make out any faces, my eyes have to wait a minute to get used to the darkness. The club's crowded tonight and some of the kids waiting out in back won't be able to get in. 'Tainted Love' is playing, loudly, over the stereo system and the dance floor is packed with people, most of them young, most of them bored, trying to look turned on. There are some guys sitting at tables who all look at this one gorgeous girl, longingly, hoping for at least one dance or a blow job in Daddy's car and there are all these girls, looking indifferent or bored, smoking clove cigarettes, all of them or at least most of them staring at one blond­haired boy standing in the back with sunglasses on... We pass through the crowd and walk into the back, leaving the thumping music and the smoke-filled room behind us.'
He also goes to the New Garage 'downtown between 6th and 7th or 7th and 8th':
'The New Garage is actually a club that's in a four-story parking lot; the first and second and third floors are deserted and there are still a couple of cars parked there from the day before. The fourth story is where the club is. The music's loud and there are a lot of people dancing and the entire floor smells like beer and sweat and gasoline. The new Icicle Works single comes on and a couple of The Go-Go's are there and so is one of The Blasters...'

There are also a couple of scenes set in 'The Edge':

'The DJ at the Edge tonight isn't wearing a shirt and his nipples are pierced and he wears a leather cowboy hat and between songs he keeps mumbling 'Hip-Hip-Hooray.' Kim tells me that the DJ obviously cannot decide whether he's butch or New Wave... Lindsay and I walk upstairs to the restroom and do some coke in one of the stalls. Above the sink, on the mirror, someone's written in big black letters 'Gloom Rules.' After we leave the restroom, Lindsay and I sit at the bar upstairs and he tells me that there's not too much going on anywhere in the city. I nod, watch the large strobe light blink off and on, flashing across the big dance floor'....
'It's two in the morning and hot and we're at the Edge in the back room and Trent is trying on my sunglasses and I tell him that I want to leave. Trent tells me that we'll leave soon, a couple of minutes maybe. The music from the dance floor seems too loud and I tense up every time the music stops and another song comes on. I lean back against the brick wall and notice that there are two boys embracing in a darkened corner.... We walk out into the hot night and Blair asks, 'Well, did we have a good time?' and nobody answers and she looks down'.
Posted by Transpontine at 10:19 am

This sounds like my kind of novel. Will have to check it out!