Interesting review by Dylan Jones of Gentlemen Of Bakongo, Daniele Tamagni's book chronicling "a journey with the Sapeurs of the Bakongo district of Brazzaville in Congo, the real cradle of Sape, the 'religion of clothing' ". Apparently many of the Sapeurs 'fantasise about walking the streets of Paris or Brussels - places most can only dream of visiting - returning to Brazzaville as sartorial aristocrats of ultimate elegance. They emerged from the chaos of the Mobutu reign, their distinctive look a way of rebelling against his dictatorial decree that everyone should dress in traditional African costume... To them, to be well-dressed is to be successful, which is not just the essence of bling, it is a cri de coeur. But they do look extraordinary. They wouldn't look out of place strolling down Savile Row, resplendent in their multicoloured finery, carrying canes and cigars, putting one white buckskin loafer in front of the other and smiling as though they haven't a care in the world'. 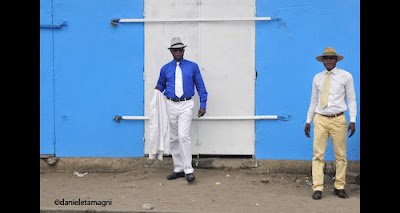 The book blurb notes that 'In 1922, G. A. Matsoua was the first-ever Congolese to return from Paris fully clad as an authentic French gentleman, which caused great uproar and much admiration amongst his fellow countrymen. He was the first Grand Sapeur. The Sapeurs today belong to 'Le SAPE' (Societe des Ambianceurs et des Personnes Elegantes) - one of the world's most exclusive clubs. Members have their own code of honour, codes of professional conduct and strict notions of morality. It is a world within a world within a city. Respected and admired in their communities, today's sapeurs see themselves as artists. Each one has his own repertoire of gestures that distinguishes him from the others'. 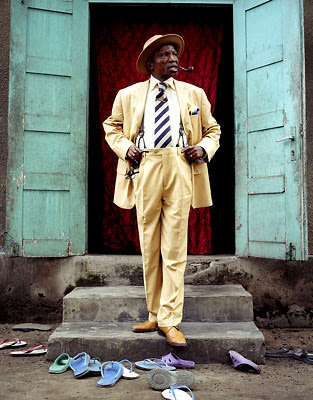 More Sapeur photos by Hector Mediavilla (who took the picture above here).

(note to self - must get round to doing that post on proletarian dandyism...)
Posted by Transpontine at 7:27 am

lod said...
This comment has been removed by the author.
3:24 pm

I am from the Republic of Congo,and would like to bring some light in here contrary to what is is stated above.La Sape started in Congo Brazzaville in Bacongo neighborhood and not in the Democratic Republic of Congo whose capital city is Kinshasa where Mobutu was president.It's very important to recognize the genuineness of those who brought that cultural item forward;the Congolese of Brazzaville.La Sape has a vocabulary in "lari-kongo" language.Words like nkelo(nice speech),nkombo( brutal person, jerk),ngaya(inelegant) person),mfunda(marvel,commotion)are words used by sapeurs in their daily life. History and truth should not be distorted,please!

Thanks Lod, you are of course right. The quote is from a newspaper review that failed to distinguish between Congo Brazzaville not the Democratic Republic of Congo (formerly known as Zaire).

This is very interesting. Wonder how they maintain their elegance in a tumultous neighbourhood.