Tina Modotti (1896-1942) is best known as photographer, but her's was one of those lives that joined the dots between different radical and cultural scenes in the first half of the twentieth century. She was born in Udine, Italy, where her father was a militant worker and member of a banned socialist group. Tina had to drop out of school and earn a living as a silk worker in a sweatshop where 'the silk reelers were sometimes allowed to sing as they toiled. At first pianissimo and barely audible over the whirring of machinery, the juvenile voices would soar into the popular 'They call me Mimi' from La Boheme or 'ves doi voi che son dos stelis', a Friulian love song they had all been humming since childhood'. 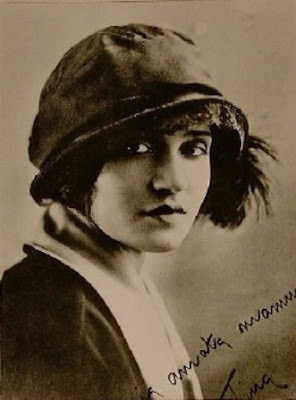 In 1913, aged 16, she moved to San Francisco where she became an actress. She had a starring role in a Hollywood silent movie, The Tiger's Coat (1920), playing a Mexican servant who ended up heading a dance troupe.

After a period in Los Angeles bohemian circles she ended up in Mexico City in the aftermath of the revolution, living with the photographer Edward Weston, befriending Diego Riviera (who she modelled for while he worked on some of his murals), Frida Kahlo and B.Traven, and throwing herself into radical politics, including the unsuccessful campaign against the execution of the Italian anarchists Sacco and Vanzetti in the USA in 1927. Another of her lovers, the Cuban revolutionary Julio Antionio Mella was shot dead as the two of them walked together. In this period she was increasingly developing her practice as a photographer, with her work appearing in international radical publications such as El Machete, Arbeiter-Illustrierte-Zeitung (AIZ), and New Masses.

She joined the Communist Party, and like many radicals of her generation was compromised by her links to Stalinist terror, particularly during the Spanish Revolution/Civil War where she worked alongside her lover Vittorio Vidali, a notorious henchman implicated in the death of many Poumistas, trotskyists and anarchists (including Alberto Besouchet, the first Brazilian to join the International Brigades, who disappeared after being denounced for Trotskyist sympathies - the evidence against him including an association with the Brazilian singer Elsie Houston, ex-wife of the surrealist Benjamin Peret who we have mentioned here before).

Leaving aside this terrible episode (in which the extent of her complicity is a bone of contention), I think we can still appreciate her photography and wonder what it would have been like to have gone to one of her legendary parties. Just after the First World War she lived with her lover Ricardo Gomez Robelo in LA:

'The most enduring memories of 313 South Lake Street are of boisterous parties in the studio, mobilizing Los Angeles's small bohemia, a provincial avant-garde striving for effect. "Intense, dreamy and vibrant", in Robelo's recollection, evenings throbbed "with the magic of art and congenial, exquisite friends and Saki!" Photographer Edward Weston noted of his fellow revelers: They were "well-read, worldly wise, clever in conversation,-could garnish with a smattering of French: they were parlor radicals. could sing IWW songs, quote Emma Goldman on freelove: they drank. smoked, had affairs .... "
The screen door slapping open and shut, Tina greeted her guests wearing something flowing and distinctive, her tie-dyed tunic perhaps, over a long skirt. She adored silk stockings and stacked jangling bracelets on her arm. Her eyes were rimmed in black, mouth painted into a ripe cherry, hands smoothed with her favorite honey-and-almond cream... As the evening heated up, the gregarious, streetwise Wobbly Roy Rosen might set the room on a roar with tales of the scoundrels he confronted as a "tough, tough baby" bill collector. Rosen hailed from New York, but many guests were refugees from San Francisco art circles: the painter Clarence Hinkle and his wife, Mabel, and the curly-haired Mexican Francisco Cornejo, who had created costumes and decor for Xochiquetzal, the "Toltec ballet" staged by the Denishawn modern dance troupe. An unruly sexual charge swept around the room, sending tall, tousled ex-barmaid Dorothea Childs reeling into somebody's arms as the lecherous and amusing old satyr Sadakichi Hartmann pranced from one woman to another. Jazz or Japanese music spinning on the Victrola, the studio dis:olved into a smoky, incense-fragrant maelstrom dotted with pools of colored lights from Tina's homemade Japanese lanterns. The crowd wrangled oveer aesthetics, got drunk on bootleg sake, and sucked on cigarette holders as they quoted Nietzsche and Wilde. Eyelids drooping, Robelo recited Swinburne while couples drifted out to the porch in a fever of kissing and groping.
Among the Richeys' guests was Ramiel McGehee, a baby-faced man with one glass eye and a pinched, disapproving mouth. Once a dancer who had toured Asia and was obsessed with Eastern mysticism, Ramiel metamorphosed into an undulating contortionist at the first sound of a sitar or daibyoshi'.
Living in Mexico City with Edward Weston, Modetti was once again at the centre of bohemian social life:
'New Year's Eve found the kitchen at 12 Lucerna in an uproar as Lupe Marin whipped up a spread of firecracker Mexican dishes, for which she had shopped, thus enabling a couple unable to scrape up January rent to throw a lavish party. Guests fox-trotted their way into 1924, pausing to quaff rum punch and smack their lips over the delicacies. So successful was the tertulia that Tina and Edward made it a weekly event, to be underwritten by passing the hat. "Because of grave conditions resulting from the revolution," the pair chortled, they kindled up the fabled Saturday nights, turning the Modotti-Weston household into the most dazzling light on the vanguard social circuit.
Virtually every well-known writer and artist in Mexico participated. Mexican-born, Texas-educated journalist Anita Brenner described how 'workers in paints drank tea and played the phonograph with union and non-union technical labour-scribes, musicians, architects, doctors, archaeologists, cabinet-ministers, generals, stenographers, deputies, and occasional sombreroed peasants."
....Invariably hungry, they dug into Tina's spaghetti with butter and cheese Anita's version of chongo, a traditional syrupy curd, which she served with cinnamon toast and tea, and a delicious curry and sweet rice prepared by an Indian revolutionist named Gupta. After dinner, the men heaped Colts on a table as tangos and the wicked Cuban rumba scratched their way our of the phonograph. On one memorable occasion, a guest stumbled upon her lover entwined with another woman and holloed him from room to room, popping at his feet with a small pistol. On another, Tina and Edward exchanged clothes, mimicking each other so convincingly that revelers were perplexed until Edward kicked up his pink-gartered legs and vamped outrageously. Edward loved to prance, but Tina, clumsy and uncomfortable on the dance floor, caught her breath on the parties' less frenetic edges, where talk gravitated to revolutionary art and politics'.
Quotes from Patricia Albers, Shadows, Fire, Snow – The Life of Tina Modotti, Clarkson Potter, 1999. See also this post at Museworthy.
Posted by Transpontine at 11:50 pm