Moving Gallery - The Mysterium was an event held at Trinity College of Music in Greenwich last month (19th February) as part of In the Moment: a Festival of Improvised Music and Dance. The festival was a joint initiative between Trinity and the Deptford-based Laban centre - the two of which are working together as Trinity Laban Conservatoire of Music and Dance.

The inspriation was Alexander Scriabin's never realized plan for his Mysterium, a work that called for a cast of 1000 musicians and dancers to realize his vision where: 'There will not be a single spectator. All will be participants. The work requires special people, special artists and a completely new culture. The cast of performers includes an orchestra, a large mixed choir, an instrument with visual effects, dancers, a procession, incense, and rhythmic textural articulation. The cathedral in which it will take place will not be of one single type of stone but will continually change with the atmosphere and motion of the Mysterium. This will be done with the aid of mists and lights, which will modify the architectural contours."

For this event, every corner of the building seemed to have been turned into a space for performance and installations, with corridors, corners and rooms full of dancers and musicians, through which the audience wandered between and within waves of movement and sound.

We particularly enjoyed Night Chant, a beautiful piano performance by GéNIA (picutre below), inspired by Yeibichai (Night Chant), a Navajo ritual. The Aviary, a bird themed performance by the group The Conference of Birds, also felt quite shamanic with dancer Helka Kaski moving as if she was channelling a bird. 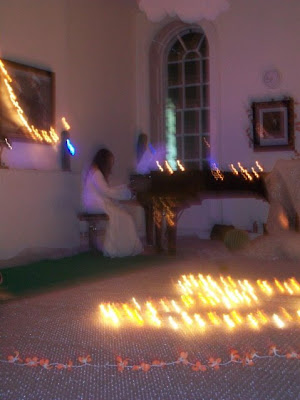 The Practice Corridor, a homage to Rebecca Horn's Concert for Anarchy, featured eruptions of piano noise with dancers and pianists moving around the corridor: 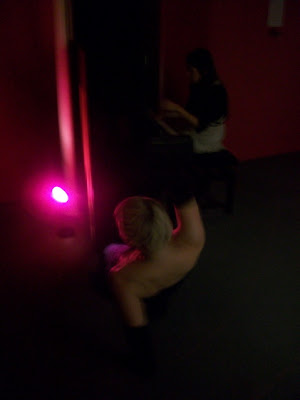 The baroque buildings, designed by Christopher Wren, used to be part of the Royal Naval College in Greenwich. Trinity College of Music, which occupies them now, remains tied to Royal patronage but nevertheless it was pleasing to see a former hub of the Empire and military transformed into a festive space. And indeed for some of the ex-colonial subjects to temporarily take over some of the space - Samvaada was a musical collaboration between the Bhavan Institute for Indian Arts and some Trinity music students: 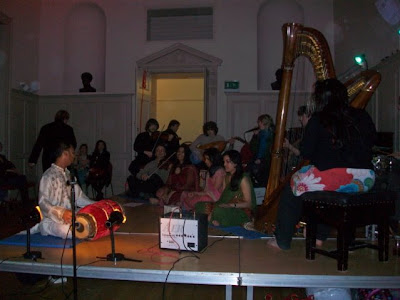 The final piece was Snowscape, outside in the courtyard, and beginning with a procession of a dancer wrapped in lights. 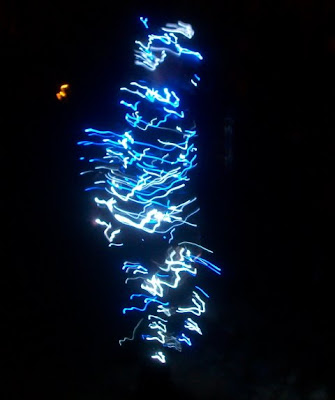 Watching contemporary dance can sometimes feel like hard work, and we weren't sure whether we were going to enjoy four hours of performance. As it happened we ended up only being able to take in a fraction of the events and wished it had gone on longer. In fact it would have been interesting if it had gone on all night, and perhaps begun to get a little messier with the boundaries between audience and performers maybe blurring a bit more.

Posted by Transpontine at 9:17 am