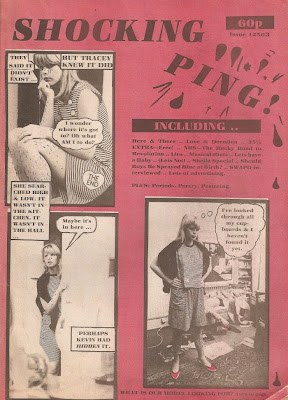 Shocking Pink was a feminist zine put out by a collective of young women in London, including my friend Katy Watson who died in the summer. As the organiser of last year's Women's Library Zine Fest! described it 'Shocking Pink, which ran from the late 1980s to early 1990s, billed itself as a “radical magazine for young women”. Part magazine with serious political coverage, part school-club magazine (if your classmates were hot-headed, deliciously witty, rebel grrrls) this magazine pre-dated riot grrrl zines with its fusion of sass, cultural appropriation and sprawling biro-made doodles all over the margins and type face'.

I've scanned in some pages from a 1988 issue (click on images to enlarge), a time when the Conservative government was embarking on a New Right 'family values' moral crusade. Most notably a law known as Clause 28 was introduced which prohibited local authorities from 'promoting homosexuality'. This issue of Shocking Pink gave prominence to the movement against the Clause, with a two page spread on a big demonstration in Manchester on 20th February 1988.

What I like about this report is that it is based around a tape recording of the event, giving a real sense of what it sounded like - the crowd running under a bridge and wailing 'Wooo Wooo', chanting slogans and singing songs.

Extracts: 'Where are we? There's people dancing in the street here, the Police are trying to move them on'... 'Singing Dykes - We're abseiling, we're abseiling, down a washing line to the lords, we're abseiling, never failing, we're abseiling against the clause'... 'This is a violin woman, she's excellent she uses just her voice and works with the violin and drumbeat. It's kind of melodic, I think you'll like it (SCREECH SCREECH, WHINE, WAIL... PUT YOUR LAWS DOWN YOUR DRAWS, WE ARE GONNA STOP THE CLAUSE). 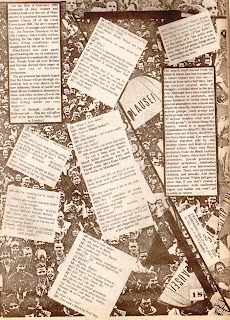 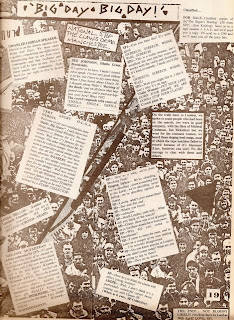 The abseiling song refers to a famous protest against the clause, also featured in this issue, next to a Shocking Pink 'Guide to Party Games' including 'Musical Riots: Rules - while the music is playing all the girlies run around gaily (no offence). When it stops all run into the streets with arms eg bricks, metal piping, broom handles and other ordinary household weaponry. Then smash windows (whilst shouting a lot. This can be difficult to do at the same time)' 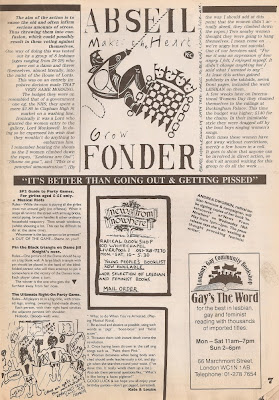 Do you have higher res versions of the Manchester pages?

And check this blog entry for another feminist zine.

I remember protesting against clause 28 outside the british embassy in Oslo (I'm swedish but spent a lot of time in Norway back then). Mostly anarchists as I recall.
Now I feel very old.

John, I have fixed this now so you should be able to read enlarged versions of all images by clicking on them (done the same to the Act Up image in next post).

Good to hear from you Evis - I wasn't on the Manchester demo reported here, but I took part in some of the big London demos, one of which ended in a big scuffle near the Prime Minister's house in Downing Street. This was a successful movement ultimately - 10 years or so later Clause 28 was repealed and an equal gay/straight age of consent introduced too.

hi! I was one of the original Shocking Pink collective! Sorry to hear of katys death..Great to see coverage of the magazine after all this time! I did the wee cartoon in the bottom corner in the manchester edition (i thought it was bad then lol) Now i'm an artist near to graduating (although at this rate ill stay an undergraduate if i dont stop wasting time on the internet 'stead of doing my dissertation LOL)
x love and hugs to everybody (not very anarchist like ha ha! xx