Simon Reynolds has efficiently scraped off his shoe the 'vigorously polished turd that is "Chinese Democracy"' by Guns N' Roses. Whoever this album was 'eagerly awaited' by, I was not one of them - I would apply Reynolds' diss of the album to their entire career: 'redolent of the 4-hour erections induced by Viagra: engorged but devoid of desire, a meaningless show of strength'. 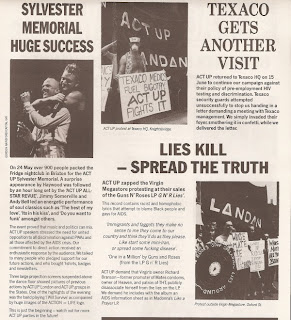 What I'd forgotten about until today was a row about their political dumbness early in their career, with their 1989 song 'One in a Million' and its lyrics about 'niggers', 'immigrants' and 'faggots' who 'spread some fucking disease'. In London, AIDS activist group ACT UP protested at Virgin Megastore demanding that an AIDS information sheet be added to the album to counter its 'racist and homophobic lyrics'. Axl Rose's later comments that he wasn't homophobic because he liked Elton John were laughable; not so funny is the fact that it was later covered by nazi band Skrewdriver.
The report of the action comes from 'ACT UP Action News' (London, June 1989). Note next to it there is also a report of an ACT UP Sylvester Memorial in May 1989 at the Fridge nightclub in Brixton, featuring Jimi Somerville (Bronski Beat/The Communards) and Andy Bell (Erasure). The great Sylvester died from AIDS in December 1988. Give me Dance (Disco Heat) over anything G N'R have done any day of the week.
[click on picture to see enlarged image]
Posted by Transpontine at 4:31 pm