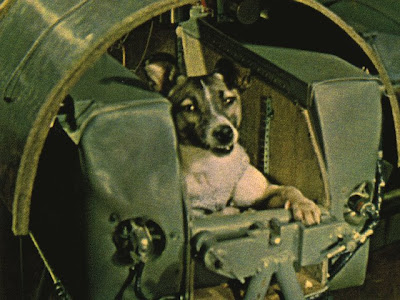 Thanks to John Hutnyk at Trinketization for reminding me that today is the 51st anniversary of the launch of Spuntnik 2, with its passenger Laika the dog becoming both the first mammal in space and the first space fatality a few hours later.

I've discussed the first songs in space by a man and a woman, but perhaps the honour should go to a dog whimpering in zero gravity. There have been quite a few Laika references in music - indeed there's both a Finnish band called Laika & The Cosmonauts and a UK band, Laika (who I once saw at the Venue in New Cross supporting, I think, Spirtitualized Electric Mainline).

The best of a number of songs referring to the dog is by Arcade Fire - not so much a song about the dog as one evoking the sadness of Laika being sent away to die as a metaphor for the fate of an errant brother ('Our mother should have just named you Laika! It's for your own good, It's for the neighborhood').

There's a great one by the 80s Spanish band Mecano, too: