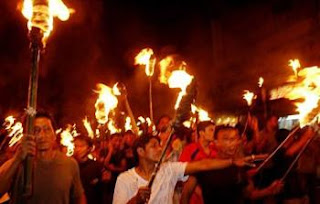 Hundreds of disco and nightclub workers protested Wednesday in Nepal's capital for the right to work all night long, eyewitnesses and police said. Protesters blew whistles and screamed slogans "Stop the crackdown on night workers" and "Down with government," as they rallied in Thamel, Kathmandu's tourist hub, an AFP reporter at the scene said. Police watched the protesters but no one was arrested.
"More than 500 workers staged demonstration demanding they be allowed to operate bars and discos all night," Ramesh Thapa, a police officer at the scene, told AFP. "Due to the operation of night bars and restaurants, public security has worsened. We have begun to crackdown on such midnight activities to maintain law and order," Thapa said.
Police began raiding scores of restaurants and discos last week after the new home minister of the Maoist-led government ordered a crackdown on them, saying nighttime activities were compounding security problems in the capital. Since then, disco bars and eateries that operate at night have been forced to close down by midnight in Kathmandu - home to more than two million people - in a move that has irked some in the business community. "There are thousands of people who are dependent on night jobs to earn a living. The government just can't take such a decision on an ad hoc basis," Ramesh Basnet, a protester, told AFP.
"Closing the business is not the solution. The government should make proper laws to regulate nighttime business rather than completely shutting it down," Basnet added. Sameer Gurung, president of the Night Entrepreneurs Association, said the forceful closure of dance bars, nightclubs and discos have left some 80,000 people jobless.
Source: AFP, 17 September 2008
Posted by Transpontine at 10:12 pm