Famous Glasgow nightclub The Arches is at risk of losing its license (though its website declares that it is currently still open for business as usual):

'One of Scotland's leading arts venues has been ordered to close for six weeks after police discovered dozens of men engaged in indecent acts within a concealed area. Strathclyde Police uncovered the incident after receiving several complaints over a number of months that "acts of public indecency" were taking place at a monthly club run at the Arches in Glasgow. During an arranged visit to the Burly night in March this year two uniformed officers found up to 30 men "in various states of undress" and engaging in sexual activity in a corner area covered by black mesh. Despite the presence of two uniformed officers several of those taking part continued with the activity before disappearing into the crowd. One man was arrested and reported to the procurator-fiscal.
After a formal police complaint was made to the City of Glasgow Licensing Board, the Arches was told yesterday to shut its doors for six weeks after it was accepted the management was "not fit and proper" to hold the entertainment licence. The venue is to lodge an immediate appeal and will continue to trade prior to the case being taken to the sheriff court, where management hope the board's decision will be overturned. Failing that, the venue will have to comply with the sanction, shutting the entire Arches operation and then paying the local authority's legal costs. It has already axed the Burly event, which attracted older gay men from all over Scotland.
(Glasgow Herald, 30 August 2008) 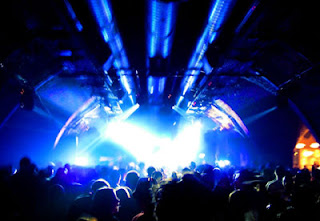 The Arches is surely the best known club in Scotland: 'With a capacity of up to 3000, the cavernous Grade A listed Victorian archways provide the perfect setting for a phenomenal production set-up, with a Funktion 1 PA system and award-winning visuals supporting some of the biggest nights in Europe over the last 15 years. Which is probably why a selection of top DJ’s recently voted it amongst the top ten clubs in the world in DJ magazine. Alongside the five giants; Death Disco, Pressure, Colours, Freefall and Inside Out, where the world’s biggest DJs regularly play; Pete Tong, Sasha, Laurent Garnier, David Holmes, Judge Jules, Erol Alkan, Green Velvet and Carl Cox to name but a few, the Arches is also known for its smaller, more independent and specialist club nights, such as newcomers Art of Parties and massive weekly student night Octopussy, which houses a jacuzzi, swimming pool, bouncy castle and wedding chapel' (source: Arches website).
Posted by Transpontine at 8:08 pm