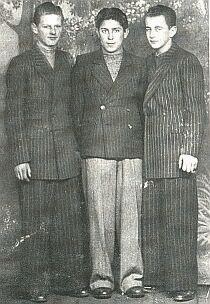 I've posted here before on jazz subcultures under the Nazis, including the Zazous in France and Hamburg anti-fascists. There’s an interesting overview of this subject in Jazz Youth Sub Cultures in Nazi-Europe by Anton Tantner (first published in International Students of History Association Journal, 2/1994).

Tantner mentions some scenes I hadn’t heard of before, including the Vienna ‘Schlurfs’ (a name ‘which means people who are going very slowly and who are lazy’) and the Prague ‘potapki’ (meaning ‘divers’). The former were apparently predominately working class; the boys, with longish oiled hair, tended to wear ‘shirts or coloured pullovers and coats with the belts always open... wide trousers and white scarfs’ (see picture). The girls, sometimes known as ‘Schlurf-cats’ girls wore 'coloured dresses, kneelong skirts and upswept hair’. They improvised parties wherever the opportunity arose: ‘Schlurfs went to merry-go-rounds, where the owners sometimes played the swing records they had brought along’.

In Vienna ‘fights between members of the Hitler Youth and Schlurfs took place rather often... On one occasion about 50 Schlurfs came together and attacked a home of the Hitler Youth’. The Austrian Schlurfs ‘stayed outsiders even after the liberation from fascism. In the new democratic newspapers they were regarded as "weed" endangering the "Austrian tree of life"'.

There is more information in an article by Alexander Mejstrik, which quotes a 1942 Nazi publication describing the Schlurfs as ‘immature youngsters of deficient nature who strive for superficial leisure, dance, jazz music and female company, and who show no interest in politics... the Schlurf-youth has to be fought because of their negative attitude towards the sate, their softness, and their detrimental mindset'. In the same year a Viennese newspaper claimed that the Schlurf ‘smokes like a Jewish coffeehouse poet’, ‘drinks like a British colonial soldier’ and strives for ‘the Anglo-Saxon gangster ideal’. Hitler Youth raids and patrols were deployed against the Schlurfs, with a set of particular measures set out in a document called ‘Bekampfung des Schlurfunwesens’ (‘fighting the Schlurf nuisance’). Schlurfs could have their long hair forcibly cut.

At a bar-restaurant called the Second Cafe in the Prater area of Vienna ‘the youngsters could dance to live music, drink alcohol and smoke even though at the time all this was forbidden’. They sang a song which declared ‘Hitler Youth, watch out for your lives, because the Schlurf of the Second Cafe in the night woke up, They will brandish their knives, and St Louis Blue will sing his songs again. Police, fuzz, stop cutting bald heads’.


(Source: Alexander Mejstrik, 'Urban Youth, National-Socialist Education and Specialized Fun: the making of the Vienna Schlurfs, 1941-44' in 'European Cities, Youth and the Public Sphere in the Twentieth Century' by Axel Schildt and Detlef Siegfried (Ashgate Publishing, Ltd., 2005).
Posted by Transpontine at 1:56 pm