Seven months after the huge London anti-poll tax demonstration/riot of March 31st 1990, another demo was planned in the capital on 20th October 1990. While not on the same scale, it did end in clashes with police in Brixton and 120 arrests.

The organisation of the October demo was a fractious affair. The national leadership of the All Britain Anti Poll Tax Federation was firmly in the hands of 'Militant' (today known as the Socialist Party) and they were distrusted by many in the movement for their denouncing of rioters after March 31st.  They were not keen at all to organise another national demo in 1990, and instead half heartedly agreed for a London mobilisation ending with a rally to greet a contingent of 75 poll tax protestors who had walked to London from Glasgow, Liverpool and South Wales as part of the 'People's March Against the Poll Tax'.

Meanwhile the Trafalgar Square Defendants Campaign, set up to support those arrested in relation to March 31st, wanted to put the plight of poll tax prisoners and defendants at the forefront of the October demonstration - something which they felt was being neglected by the London demo organisers as well as the national federation. So, as advertised on the TSDC leaflet below, there were several interlinked events on the day. A TSDC picket of Horseferry Road magistrates court (scene of many poll tax trials) was followed by a march of around 1500 people  to Kennington Park, the assembly point for the London Federation demonstration. The March 31st demo had also assembled in Kennington, but headed from there into Whitehall and Trafalgar Square. On October 20th the march avoided central London entirely and instead headed further out to Brockwell Park in Brixton.

The crowd on the combined march to Brockwell Park and the rally there was variously estimated at between 10 and 25,000. After speeches by Tony Benn and others, a few thousand people assembled to march the short distance to Brixton Prison, where several poll tax prisoners were being held. This was not a spontaneous splinter march, but had been planned from the start - and the police were ready.

For me personally it was a strange time. I lived on Tulse Hill Estate, located between Brockwell Park and Brixton Prison, so this was all happening in my local area. I went along to the Park and joined the demonstration as it made it's way up Brixton Hill towards the prison. Its route was blocked by a line of police close to the jail, and at this point I headed off. My grandmother had just died and I was travelling that night to the Hebrides for the funeral.  As I made my way back to the Estate I saw that the side streets were full of police vans whose occupants were getting out and putting on their riot gear. I picked up my suit for the funeral and headed down to Brixton to get the train only to find the station closed and the streets blocked by police vans and crowds. By this point the police outnumbered the protestors.

What had happened in the interim was that the police had baton charged the crowd by the prison and driven people back down the hill into central Brixton. In the clashes a police bike was set on fire and some market stalls on Electric Avenue had been turned over as barricades. A few petrol bombs were also thrown, something very unusual on political demonstrations in England (though sometimes seen in full on inner city uprisings) and possibly not unrelated to the presence of some experienced radical street fighters from France, Italy and elsewhere.

The 120 arrests meant plenty more work for the TSDC, and quite a few people were injured by police seemingly out for revenge for what had happened back in March.

The following short account comes from the November 1990 newsletter of the Brixton based Community Resistance Against the Poll Tax, which I was involved with for a while alongside several other poll tax groups at work and in my area. 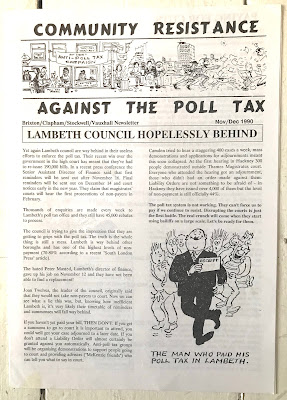 'At 3.30 in the afternoon a group of over 3,000 people marched to Brixton prison where 4 prisoners are still held from the 31st of March. As before it was well organised and stewarded by the TSDC. The march arrived at the prison only to find that the police wanted to hem everyone in behind crowd barriers. As the march stopped on Brixton Hill the crowd became very compacted behind the barriers. TSDC organisers asked the police to allow the march round the back of the prison, the officer in charge of the police seemed to make sure he was not around at this point. The police were asked to move the barriers further up the road so the crowd could move up and ease congestion, this was also refused. The police took the megaphone from the TSDC organisers who were very visible in their bright pink bibs. They did not, as they claim, give out megaphones - this is yet another POLICE LIE.
The angry and frustrated crowd threw one or two beer cans but the police needed no excuse to charge into the crowd. Those who didn't move fast enough were truncheoned and arrested. A young mother asked a police woman to take her children over the crowd barrier to safety, the caring pig refused. The crowd was pushed down Brixton Hill and scores of riot police, who had been waiting down side streets preparing to take revenge for March 31 came out and further charged the crowd. Individuals trying to leave the crowd and avoid trouble were pushed back in. The crowd was driven back into Brixton to the dismay of those trying to do a peaceful day's shopping. Buses were stopped, the tube station was closed, so those wishing to leave were unable to. Groups were pushed into the market, the High Road and Coldharbour Lane. Market skips and a police motorbike were set on fire. 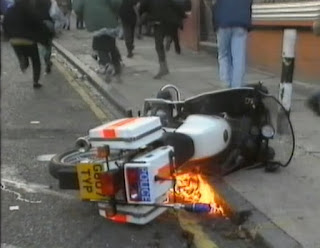 People were pushed down to Camberwell and up towards Oval, many brutal arrests were made (about 120 in all), demonstrators continued to fight back against the police till about 7 p.m. The TSDC provided excellent legal back up. Solicitors were provided for all those arrested and witness statements made. The initial police charges were filmed by video camera, the TSDC are in a position to show how the police provoked the trouble and may well prosecute them. A picket was held at Southwark police station to support those arrested. On Sunday Oct 31st the TSDC held a press conference to let the media know the truth. On Monday pickets were held at courts and courts are still being picketed for those still held in custody. Bail conditions have been very strict e.g. wanting a £1,000 surety for someone charged with threatening behaviour' (Community Resistance Against the Poll Tax, November 1990) 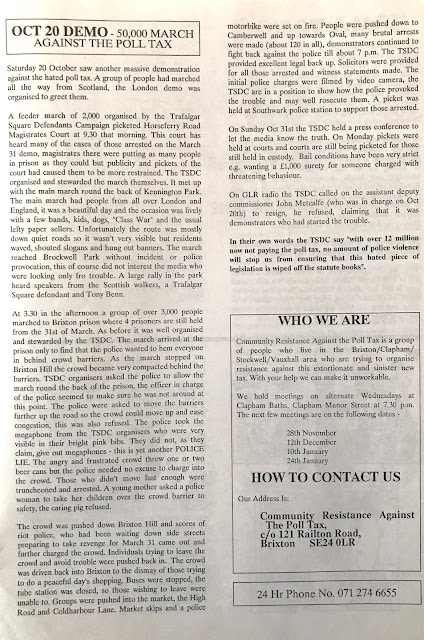 The TSDC produced their own detailed account of the events based on legal observers on the day. This was published as 'Premilinary report on the policing of the anti-poll tax demonstration of October 20th'. 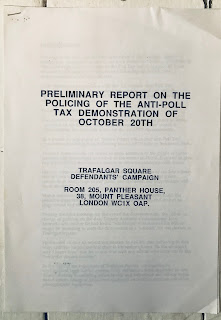 The following extracts cover the flashpoint outside the prison on Brixton Hill (PSU=Police Support Unit, i.e. the riot squad). 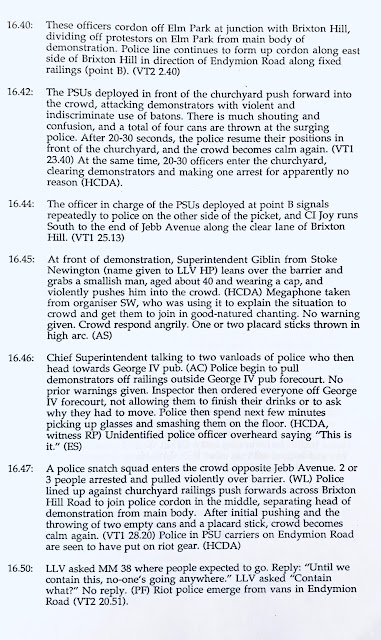 '16.40: These officers cordon off Elm Park at junction with Brixton Hill, dividing off protestors on Elm Park from main body of demonstration. Police line continues to form up cordon along east side of Brixton Hill in direction of Endymion Road along fixed railings (point B). (VT2 2.40) 16.42: The PSUs deployed in front of the churchyard push forward into the crowd, attacking demonstrators with violent and indiscriminate use of batons. There is much shouting and confusion, and a total of four cans are thrown at the surging police. After 20-30 seconds, the police resume their positions in front of the churchyard, and the crowd becomes calm again. (VT1 23.40) At the same time, 20-30 officers enter the churchyard, clearing demonstrators and making one arrest for apparently no reason (HCDA).
16.44: The officer in charge of the PSUs deployed at point B signals repeatedly to police on the other side of the picket, and CI Joy runs South to the end of Jebb Avenue along the clear lane of Brixton Hill. (VT1 25.13)
16.45: At front of demonstration, Superintendent Giblin from Stoke Newington (name given to LLV HP) leans over the barrier and grabs a smallish man, aged about 40 and wearing a cap, and violently pushes him into the crowd. (HCDA) Megaphone taken from organiser SW, who was using it to explain the situation to crowd and get them to join in good-natured chanting. No warning given. Crowd respond angrily. One or two placard sticks thrown in high arc. (AS) 16.46: Chief Superintendent talking to two vanloads of police who then head towards George W pub. (AC) Police begin to pull demonstrators off railings outside George IV pub forecourt. No prior warnings given. Inspector then ordered everyone off George IV forecourt, not allowing them to finish their drinks or to ask why they had to move. Police then spend next few minutes picking up glasses and smashing them on the floor. (HCDA, witness RP) Unidentified police officer overheard saying "This is it." (ES)
16.47: A police snatch squad enters the crowd opposite Jebb Avenue. 2 or 3 people arrested and pulled violently over barrier. (WL) Police lined up against churchyard railings push forwards across Brixton Hill Road to join police cordon in the middle, separating head of demonstration from main body. After initial pushing and the throwing of two empty cans and a placard stick, crowd becomes calm again. (VT1 28.20) Police in PSU carriers on Endymion Road are seen to have put on riot gear. (HCDA) 16.50: LLV asked MM 38 where people expected to go. Reply: "Until we contain this, no-one's going anywhere." LLV asked "Contain what?" No reply. (PF) Riot police emerge from vans in Endymion Road (VT2 20.51). 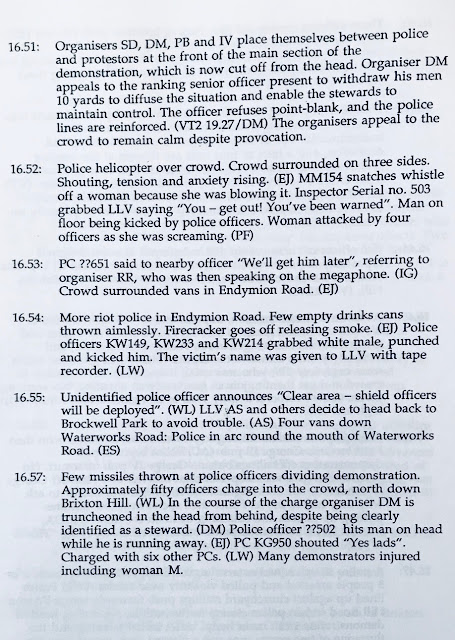 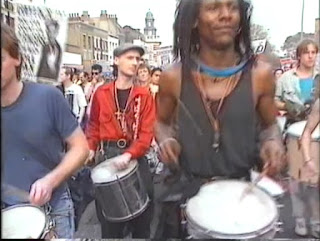 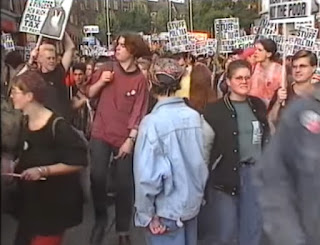