By this point more than 100 people had been jailed for up to 4 years following the poll tax riots in London and other demonstrations (for instance eight people were jailed as a result of a poll tax demo in Colchester, Essex in March 1990). In addition another 70 people has been sent to prison for not paying the poll tax – theoretically any of the many millions of non-payers could have suffered a similar fate, though in practice the poll tax was on its last legs. Following the departure of Margaret Thatcher as Prime Minister, incoming Tory leader John Major had accounced the scrapping of the poll tax in March 1991, though it was not until April 1993 that the new Council Tax was brought in to replace it.

One difficulty was that with its aim more or less achieved, the organised poll tax movement lost momentum and began to go into decline. But people were still being dragged through the courts and prisoners still needed support. The Labour Party and even the Militant-dominated All Britain Anti-Poll Tax Federation had been unsupportive to say the least, the latter initially denouncing people arrested in the March 1990 'Battle of Trafalgar Square'. Hence the emphasis in this leaflet on achieving an amnesty for poll tax protestors and non-payers and building support in the labour movement (though some of us thought that the latter was a hopeless task as least as far as the Labour Party and trade union leaderships were concerned). 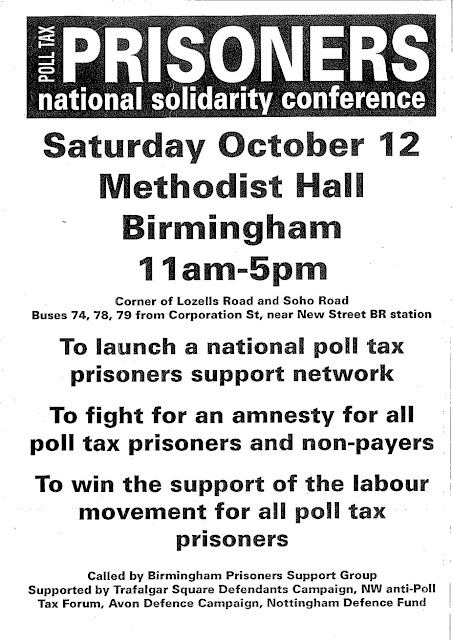 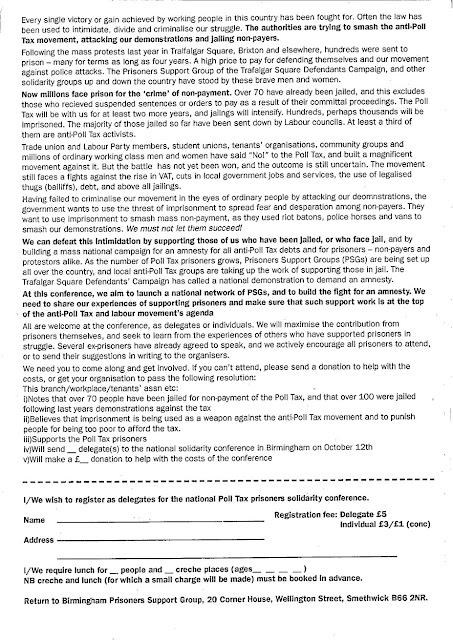 'Every single victory again achieved by working people in this country has been fought for. Often the law has been used to intimidate, divide and criminalise our struggle. The authorities are trying to smash the anti-poll tax movement, attacking our demonstrations and jailing non-payers.

Following the mass protests last year in Trafalgar Square, Brixton and elsewhere, hundreds were sent to prison – many for terms as long as for four years. A high price to pay for defending themselves and our movement against police attacks. The Prisoners Support Group of the Trafalgar Square Defendants Campaign, and other solidarity groups up and down the country have stood by these brave men and women [...]

We can defeat this intimidation by supporting those of us who have been jailed or or who face jail by building a mass national campaign  for an amnesty for all anti poll-tax debts and for prisoners – non-payers and protesters are like. As the number of poll tax prisoners grows, prisoner support groups (PSGs) are being set up all over the country, and local anti-poll tax groups are taking up the work of supporting those in jail. The Trafalgar Square Defendants Campaign has called a national demonstration to demand an amnesty.

At this conference, we aim to launch a national network of PSGs and to build the fight for an amnesty. We need to share our experience of supporting prisoners and make sure that such support work is at the top of the anti-poll tax  and labour movement’s agenda'.