Next up in the Poll Tax Archive,  a leaflet from early 1991 giving advice to people being taken to court by Lambeth Council for non-payment. By this time millions of  people were behind in their payments or had not paid at all since the poll tax was introduced in April 1990 (in England & Wales, a year earlier in Scotland). People were being taken to court in their thousands for non-payment and the strategy of the anti poll tax movement was to try and delay the process by making court cases last as long as possible. 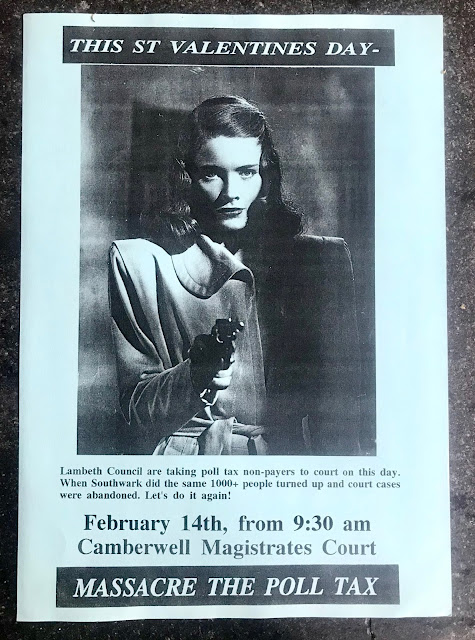 Lambeth Council are taking poll-tax non-payers to court on this day. When Southwark did the same 1000+ people turned up and court cases were abandoned. Let’s do it again!
February 14th, from 9:30 am Camberwell magistrates court 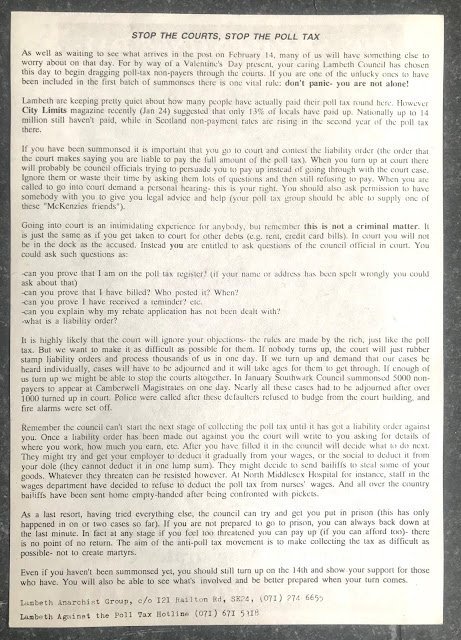 As well as waiting to see what arrives in the post on February 14th, many of us will have something else to worry about on that day. For by way of a Valentine’s Day present, your caring Lambeth Council has chosen this date to begin dragging poll tax non-payers through the courts. If you are one of the unlucky ones to have been included in the first batch of summonses there is one vital rule: don’t panic – you are not alone!

Lambeth are keeping pretty quiet about how many people have actually paid their poll tax round here. However City Limits magazine recently (January 24) suggested that only 13% of locals have paid up. Nationally up to 14,000,000 still haven’t paid, while in Scotland non-payment rates are rising in the second year of the poll tax there.

If you have been summonsed it is important that you go to court and contest the liability order (the order that the court makes saying you are liable to pay the full amount of the poll tax). When you turn up at court there will probably be council officials trying to persuade you to pay up instead of going through with the court case. Ignore them or waste their time by asking them lots of questions and then still refusing to pay. When you are called to go into court demand a personal hearing – this is your right. You should also ask permission to have somebody with you to give you legal advice and help (your poll tax group should be able to supply one of these “McKenzie’s friends”).

Going into court is an intimidating experience for anybody, but remember this is not a criminal matter. It is just the same as if you get taken to court for other debts (e.g. rent, credit card bills). In court you will not be in the dock as the accused instead you are entitled to ask questions of the council official in court. You could ask such questions as:

It is highly likely that the court will ignore your objections – the rules are made by the rich, just like the poll tax. But we want to make it as difficult as possible for them. If nobody turns up, the court will just rubber stamp liability orders and process thousands of us in one day. If we turn up and demand that our cases be heard individually, cases will have to be adjourned and it will take ages for them to get through. If enough of us turn up we might be able to stop the courts altogether.

In January Southwark Council summonsed 5000 non-payers to appear at Camberwell magistrates on one day. Nearly all these cases had to be adjourned after over 1000 turned up in court. Police were called after these defaulters refused to budge from the court building and fire alarms were set off.

Remember the council can’t start the next stage of collecting the poll tax until it has got a liability order against you. Once a liability order has been made out against you the court will write to you asking for details of where you work, how much do you earn, etc. After you have filled it in the council decide what to do next. They might try and get your employer to deduct it gradually from your wages, or the social to deduct it from your dole (they cannot deduct it in one lump sum). Whatever they threaten can be resisted however. At North Middlesex Hospital for instance, staff in the wages department have decided to refuse to deduct the poll tax from nurses' wages. And all over the country bailiffs have been sent home empty-handed after being confronted with pickets.

As a last resort, having tried everything else, the council can try and get you put in prison (this has only happened in one or two cases so far). If you’re not prepared to go to prison, you can always back down at the last minute. In fact at any stage if you feel too threatened you can pay up (if you can afford to) – there is no point of no return. The aim of the anti poll tax movement is to make collecting the tax as difficult as possible – not to create martyrs.

Even if you haven’t been summonsed yet, you still turn up on the 14th and show your support for those who have. You will be able to see what’s involved and be better prepared when your time comes.

(I remember giving this leaflet out at Brixton tube station. Can't recall source of the film noir image - anybody recognise the actor/film?)

The leaflet mentions the crowd at Camberwell Magistrates Court summonsed for non-payment by Southwark Council on 14 January 1991. Here's a report of this from Socialist Organiser (23 January 1991) by a member of Nunhead Anti Poll Tax Union: 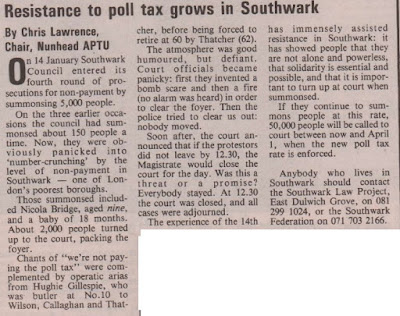 
Posted by Transpontine at 6:56 am