'They call themselves the Gender Benders' (1984)

I saw an online discussion recently about the origins of the term 'gender bender'. Seemingly Jon Savage used it in a 1980 article about David Bowie in The Face, and it seems to have been in use in UK/US in the 1970s if not earlier. But it was with the advent of Boy George and Culture Club that the term became applied in the popular press to a whole fashion scene/subculture. The first example I could find at British Newspaper Archive was from the Sunday Mirror, 22 January 1984, 'Gender Benders' by Linda McKay. 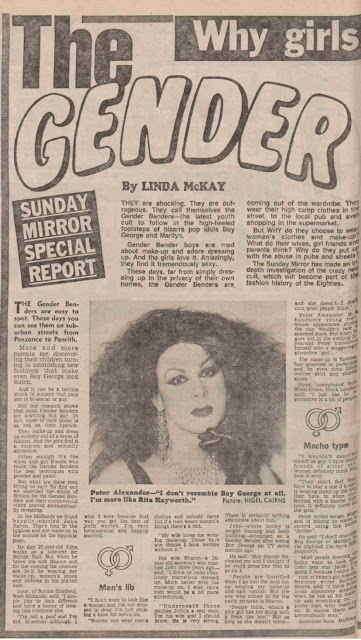 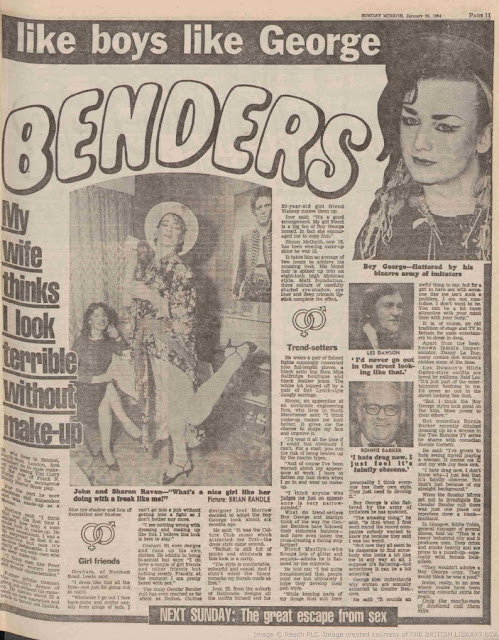 'They are shocking. They are outrageous. They call themselves the Gender Benders, the latest youth cult to follow in the high-heeled footsteps of bizarre pop idols Boy George and Marilyn. These days, far from simply dressing up in the privacy of their own homes, the Gender Benders are coming out of the  wardrobe. They wear their camp clothes in the streets, to the local pub and even shopping in the supermarket… The Sunday Mirror has made an in-depth investigation of the crazy new cult, which will become part of the fashion history of the 80s,

Gender Benders are are easy to spot. These days you can see them on suburban streets from Penzance to Penrith, More and more parents are discovering their children turning to astonishing new fashions that make even Boy George look butch. And It can be a terrible shock to suspect that your son is bisexual or gay. But our research shows that most Gender Benders are anything but gay. In fact, most of their blood is as red as their lipstick. They make-up and dress up entirely out of a sense of fashion. And the girls find it a turn-on and sexually attractive'

For a 1970s example of the term see a letter entitled 'gender benders' in Texas Monthly (August 1978), describing a sex reassignment clinic in Houston.  Simon Reynolds (see comment below) has spotted a 1981 book by David Egnar, 'The Gender Benders: a look at the trends distorting the roles of men and women' published by Radio Bible Class, a US Christian publisher - a book bemoaning the undermining of biblical gender norms by feminism and the sexual revolution . 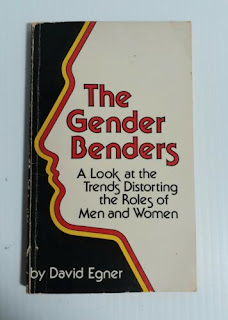 Here's a book from 1981 that has Gender Benders in the title -
https://www.ebay.com/itm/115396901560?chn=ps&mkevt=1&mkcid=28
Not celebrating the phenomenon, appears to be a denunciation - the subtitle is "A Look at the Trends Distorting the Roles of Men and Women" - plus it's published by some kind of Christian press as far as I can tell - Radio Bible Class!

On the other hand, I have somewhere a book about Gender Benders in pop that was published in the early '80s. Can't remember the title or author but pretty certain "gender benders" is in at least the subtitle.

Thanks Simon, yes I feel sure that the term must have been applied to Boy George et al prior to that January 1984 Mirror article, after all peak Culture Club was 1983 when they went to no.1 in States and UK. I have found some earlier uses of the term in relation to transexuals from 1970s.