'Pay no poll tax' posters like this one graced many a window during the anti-poll tax movement.  This particular one was produced in March 1990 by Community Resistance Against the Poll Tax,  a group based in the South London borough of Lambeth. The address given on the poster is 121 Railton Road SE24 - home of the 121 anarchist centre and, as discussed here previously, the Dead by Dawn parties.

There were many political tendencies within the movement, with debates and disagreements about the way forward. In Lambeth there were actually three borough wide groups - Lambeth Against the Poll Tax (Labour left and Socialist Workers Party); Lambeth Anti Poll Tax Union (dominated by 'Militant', now the Socialist Party) and Community Resistance Against the Poll Tax (which included  anarchists and assorted non-party activists).  The key political difference was the first two (LAPT and LAPTU) placed a great emphasis on lobbying the local Labour council not to implement the poll tax, which Community Resistance dismissed as naive. At the time this leaflet came out the Council had in fact just agreed to set the poll tax amount for Lambeth despite a riotous demonstration outside the Town Hall. 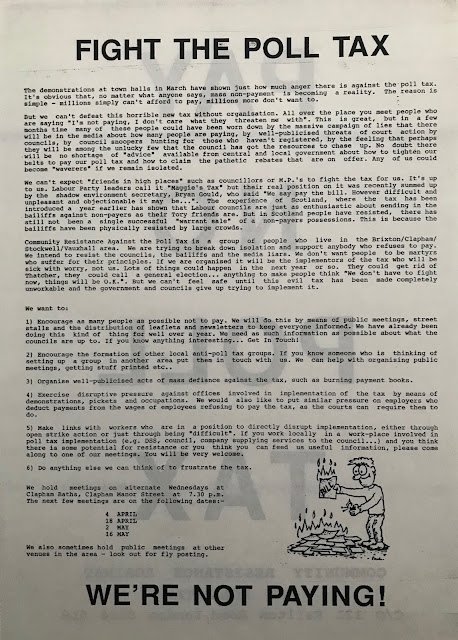 Here's the text from back of the leaflet:

The demonstrations at town halls in March have shown just how much anger there is against the poll tax. It’s obvious that, no matter what anyone says, mass non-payment is becoming a reality. The reason is simple – millions simply can’t afford to pay, millions more don’t want to.

But we can’t defeat this horrible new tax without organisation. All over the place you meet people who are saying “I’m not paying, I don’t care what they threaten me with“. This is great, but in a few months time any of these people could have been worn down by the massive campaign of lies that there will be in the media about how many people are paying, by well-publicised threats of court action by councils, by council snoopers hunting for those who haven’t registered, by the feeling that perhaps they will be among the unlucky few that the council has got the resources to chase up. No doubt there will be no shortage of ‘advice’ available from central and local government about how to tighten our belts to pay our poll tax and how to claim the pathetic rebates that are on offer. Any of us could become “waiverers” if we remain isolated.

We can’t expect “friends in high places” such as councillors or MPs to fight the tax for us. It’s up to us. Labour Party leaders call it “Maggie‘s tax“ but the real position on it was recently summed up by the shadow environment secretary, Bryan Gould, who said “we say pay the bill. However difficult and unpleasant and objectionable it may be..". The experience of Scotland, where the tax has been introduced a year earlier, has shown that Labour councils are just as enthusiastic about sending in the bailiffs against non-payers as their Tory friends are. But in Scotland people have resisted, there has still not been a single successful “warrant sale“ of  non-payers possessions. This is because the bailiffs have been physically resisted by large crowds.

Community Resistance against the Poll Tax is a group of people who live in the Brixton/Clapham/Stockwell/Vauxhall area. We are trying to break down isolation and support anybody who refuses to pay. We intend to resist the councils, the bailiffs and the media liars. We don’t want people to be martyrs who suffer for their principles. If we are organised it will be the implementers of the tax who will be sick with worry, not us. Lots of things could happen in the next year or so. They could get rid of Thatcher , they could call a general election… anything to make people think “we don’t have to fight now, things will be OK“. But we can’t feel safe until this evil tax has been made completely unworkable and the government and councils give up trying to implement it.

1. encourage as many people as possible not to pay. We will do this by means of public meetings, street stalls and the distribution of leaflets and newsletters to keep everyone informed. We have already been doing this kind of thing for well over a year. We need as much information as possible about what the councils are up to. If you know anything interesting… Get in touch!

2. encourage the formation of other local anti-poll tax groups. If you know someone who is thinking of setting up a group in another area put them in touch with us. We can help with organising public meetings, getting stuff printed etc

3. organise well-publicised acts of mass defiance against the tax, such as burning payment books

4. Exercise disruptive pressure against offices involved in implementation of the tax by means of demonstrations, pickets and occupations. We would also like to put similar pressure on employers who deduct payments from the wages of employees refusing to pay the tax, as the courts can require them to do.

5. Make links with workers who are in a position to directly disrupt implementation, either through open strike action or just through being “difficult". If you work locally in the workplacess involved in poll-tax implementation (e.g. DSS, council, company supplying services to the council…) and you think there is some potential for resistance or you think you can feed us useful information, come along to one of our meetings. You will be very welcome.

6. Do anything else we can think off to frustrate the tax.

We hold meetings on alternate Wednesdays at Clapham Baths, Clapham Manor Street at 7:30 pm. The next few meetings are on the following dates: 4th April, 18th April, 2nd May, 16 May. We also sometimes have a public meetings at other venues in the area – look out for flyposting.

We are not paying

I am going to be giving a talk on the 'Poll Tax Rebellion - 30 years on' as part of the Datacide #18 magazine launch event on Friday 21 February 2020 at Ridley Road Social Club, 89 Ridley Road. London E8 2NH (with followed by music courtesy of  Praxis and Hekate - details here)
Posted by Transpontine at 5:15 pm