The Dancing Questionnaire series has been slightly dormant of late, so I've invited a few people to have a go - though anybody is welcome to participate. Next up is Kevin from Your Heart Out and The London Nobody Sings, the latter an excellent blog featuring a daily song about London. One of the things I like about people's answers to these questionnaires is the connections that emerge - how people at different points in their life journeys cross paths in particular places (not necessarily at the same time), or enjoy similar tunes at opposite ends of the earth.

I haven't met Kevin, as far as I know, but like many of the respondents, I am sure we have shared a dancefloor sometime. In Kevin's case I am wondering whether we might have bumped into each other, literally, at The Camden Falcon in the indie pop heyday (remember seeing Jasmine Minks there) or perhaps more recently on one of my occasional visits to How Does it Feel? in Brixton. Anyway here's Kevin's Dancing Questionnaire:

1. Can you remember your first experience of dancing?
Yes, there was a scout hall near my home in Bexleyheath which held a weekly disco for several years. This was for primary school kids, and as it was '73-'75ish there was lots of Gary Glitter, Suzi Quatro, Hues Corporation, George McCrae etc. Wonderful. Still remember winning a copy of Ken Boothe's Everything I Own for being best dressed one week. 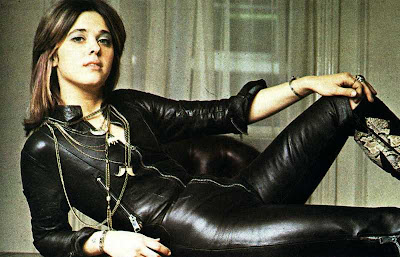 Suzie Quatro - she so invented punk

2. What's the most interesting/significant thing that has happened to you while out dancing?
I remember particularly a few years ago going to a Labour Party event in a stately home/hotel in North Wales in a work capacity, and while everyone was networking a few of us went to dance in another hall where a DJ was playing some old soul tracks more or less to himself, and after a while the guest of honour sneaked out (a Welsh Assembly minister) and joined us, literally dancing round her handbag. Beautiful summer evening, and it just suggested music as a common bond, overcoming boundaries, making friends, no words needed ...

3. You. Dancing. The best of times…
Probably 1980s going to see underground pop groups like the June Brides, Jasmine Minks playing to horribly small crowds but having a whale of a time dancing with abandon.

4. You. Dancing. The worst of times…
I really feel uncomfortable in large crowds with flashing lights (unsociable so-and-so). I have particular unpleasant memories of a Ramones gig at The Lyceum where the punks all seemed to be 7 foot tall and were slam dancing madly. It just seemed horribly macho and boring.

5. Can you give a quick tour of the different dancing scenes/times/places you've frequented?
Well, Alan McGee's Living Room, Dan Treacy's Room At The Top, Bay 63 were regular haunts in mid-'80s. Later put on own events with live groups/old soul discos etc in West End pub function rooms, then into the '90s becoming obsessed with drum 'n' bass/Mo' Wax trip hoppy stuff though only occasionally getting to places like the Heavenly Social due to shift work patterns. More recently outings seem to be confined to '60s soul type events.

6. When and where did you last dance?
Around my living room, waltzing to a Ewan MacColl song.

7. You're on your death bed. What piece of music would make your leap up for one final dance?
Candy Skin by the Fire Engines.

All questionnaires welcome - just answer the same questions in as much or as little detail as you like and send to transpontine@btinternet.com (see previous questionnaires)

Posted by Transpontine at 8:31 pm