The Poll Tax Amnesty demonstration took place in London on 19th October 1991 and was I believe the last of the national poll tax demonstrations. On 31st March 1990, hundreds of thousands had marched through central London, ending in the 'Battle of Trafalgar Square' riot. In October 1990 a smaller demonstration made its way to Brixton Prison.
A year later the movement was winding down as it had been successful - the Government had announced the poll tax was to be scrapped. But people were still being prosecuted for non-payment (and could be jailed for up to 90 days) and for taking part in earlier poll tax protests around the country. Hence the call for a 'poll tax amnesty' to write off poll tax debts and release poll tax prisoners. The initiative for the demonstration came from the Prisoners Support Group of the Trafalgar Square Defendants Campaign with the support of some local anti poll tax groups. 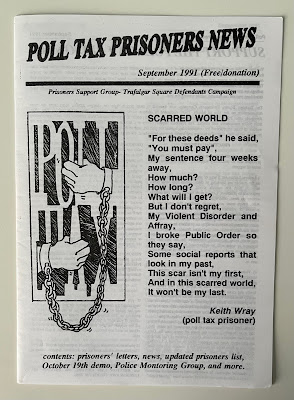 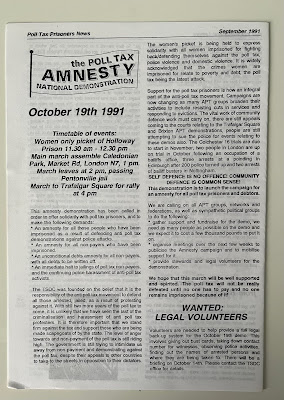 The call for the demo in 'Poll Tax Prisoners News' (Prisoners Support Group TSDC), September 1991:
'This amnesty demonstration has been called in order to offer solidarity with poll tax prisoners, and to make the following demands:
- An amnesty for all those people who have been imprisoned as a result of defending anti poll tax demonstrations against police attacks.
- An amnesty for all non-payers who have been imprisoned;
- An unconditional debt amnesty for all non-payers with debts to be written off;
- An immediate halt to jailings of poll tax non-payers, and the continuing police harassment of anti-poll tax activists;
[...]The poll tax will not be really defeated until no one has to pay and no one remains imprisoned because of it'. 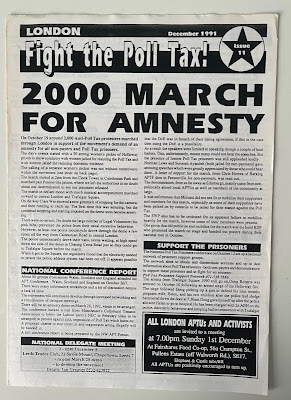 Report from 'London Fight the Poll Tax' (December 1991):
2000 March for Amnesty
'On October 19 around 2,000 Anti-Poll Tax protesters marched through London in support of the movement's demand of an amnesty for all non-payers and Poll Tax prisoners. The day's events  started with a 20 strong women's picket of Holloway prison to show solidarity with women jailed for resisting the Poll Tax and with women jailed for resisting domestic violence. The calling of a separate women's picket was not without controversy within the movement [...]
The march started at 2pm from the Clock Tower in Caledonian Park and marched past Pentonville prison, where we left the authorities in no doubt about our determination to see our prisoners released. The march in defiant mood with much musical accompaniment marched onward to central London and Trafalgar Square.
On the way Class War showed a new gimmick of stopping for the cameras and then running to catch up. The first time this was amusing, but the continual stopping and starting imposed on the demo soon became annoying. There were no arrests. No doubt the large number of Legal Volunteers (the pink bibs) prevented the police from their usual excessive behaviour.
However, at least one police motorcycle drove through the demo a few times all the way from Caledonian Road to central London. The police unnecessarily drove their vans, sirens wailing, at high speed down the side of the demo in Charing Cross Road just so they could get to Trafalgar Square before the march.
When it got to the Square, the organisers found that the electricity needed to power the public address system had been cut off. It appears possible that the DoE was in breach of their hiring agreement, if this is the case then suing the DoE is a possibility. As a result the speakers were limited to speaking though a couple of loud hailers. This, unfortunately, meant many could not hear the speeches. But the presence of former Poll Tax prisoners was still applauded loudly.
Norman Laws and Soroosh Ayandeh (both jailed for non-payment) gave arousing speeches which were greatly appreciated by those who could hear them. A letter of support for the march, from Chris Howes of Barking APTF then in Pentonville for non-payment, was read out. The demonstrators, from as far away as Edinburgh, mainly came from non-politically aligned local APTUs as well as members of the community at large.
It was unfortunate that Militant did not see fit to mobilise their supporters and members for this march, especially as some of their supporters have been picked on by councils to be jailed for their stance against the Poll Tax. The SWP also has to be criticised for its apparent failure to mobilise heavily for the march, however some of their members were present. Oe group that did publicise and mobilise for the march was the band RDF who promoted the march on stage and handed out posters during their
national tour in October'. 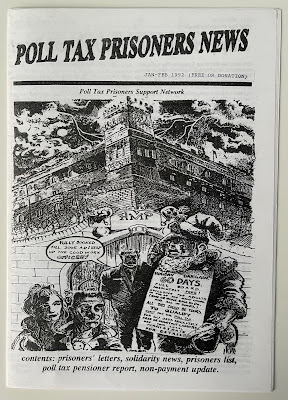 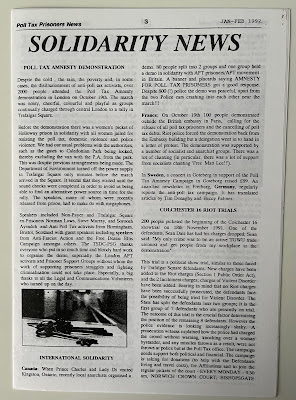 Report from 'Poll Tax Prisoners News' (Prisoners Support Group TSDC), January-February 1992:
Poll Tax Amnesty Demonstration
'Despite the cold, the rain, the poverty and, in some cases, the disillusionment of anti-poll tax activists, over 2000 people attended the Poll Tax Amnesty demonstration in London on October 19th. The march
was noisy, cheerful, colourful and playful as groups continually charged through central London to a rally in Trafalgar Square. Before the demonstration there was a women's picket of Holloway prison in solidarity with all women jailed for resisting the poll tax, domestic violence and police violence.
We had our usual problems with the authorities, such as the gates to Caledonian Park being locked, thereby excluding the van with the P.A. from the park. This was despite previous arrangements being made. The Department of Environment turned off the power supply in Trafalgar Square only minutes before the march arrived in the Square. It seems that they waited until the sound checks were completed in order to avoid us beingable to find an alternative power source in time for the rally. The speakers, many of whom were recently released from prison, had to make do with megaphones.
Speakers included Non-Payer and Trafalgar Square ex-Prisoners Norman Laws, Steve Murray, and Soroosh Ayandeh and Anti Poll Tax activists from Birmingham, Bristol, Scotland with guest speakers including speakers from Anti-Fascist Action and the Free Dessie Ellis Campaign*
amongst others.
The TSDC-PSG thanks everyone who put in so much time and bloody hard work to organise the demo, especially the London APT activists and Prisoner Support Groups without whom the work of supporting prisoners struggles and fighting criminalisation could not take place. Especially, a big
thanks to all the Legal and Communications Volunteers who turned up on the day.
International Solidarity
Canada: When Prince Charles and Lady Di visited Kingston, Ontario, recently local anarchists organised a demo. 80 people split into 2 groups and one group held a demo in solidarity with APT prisoners/APT movement in Britain. A banner and placards saying AMNESTY FOR POLL TAX PRISONERS got a good response. Despite 800 (!) police the demo was peaceful, apart from
the two Police cars crashing into each other near the march!!!
France: On October 19th 100 people demonstrated outside the British embassy in Paris, calling for the release of all poll tax prisoners and the cancelling of poll tax debts. Riot police forced the demonstration back from the Emhassy building but a delegation went in to hand in
a letter of protest. The demonstration was supported by a number of socialist and anarchist groups.  There was a lot of chanting (in particular, there was a lot of support from socialists chanting 'Free Matt Lee!!).
In Sweden, a concert in Goteberg in support of the Poll Tax Amnesty Campaign in Goteborg raised £89. An anarchist newsletter in Freiburg, Germany, regularly reports the anti-poll tax campaign. It has translated articles by Tim Donaghy and Beccy Palmer.
[*Dessie Ellis was an Irish republican on trial having been the first person extradited from Ireland to Britain. The speaker said that he might have been the first Irish speaker in Trafalgar Square since 1972, as Bloody Sunday demonstrations had repeatedly been refused permission to march to the square] 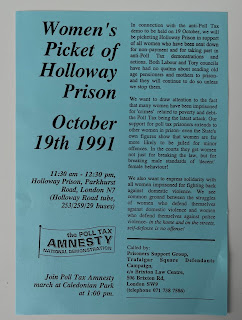 I was involved with the Prisoners Support Group, indeed I recognise my Word Perfect layout 'skills' in the leaflets and PSG Newsletters (using the resources of the anti poll tax hotspot of the Barnet AIDS Education Unit at Colindale Hospital!) . I remember lots of disagreements in the lead up to the demo. The Militant-dominated Anti Poll Tax Federation refused to support it, which was no great surprize, but even some people in the TSDC were lukewarm about it. Personally I doubted that our small group had the resources for a march on this scale, but on the other hand even a couple of thousand people on a march explicitly supporting prisoners would be worthwhile. As I wrote to a prisoner at the time:
'The poll tax amnesty march went reasonably well on Saturday. There were about 2000 people on it, and it was fairly lively... At one point I thought the police were going to attack the march in Charing Cross Road when they drove down the road at high speed with their sirens blaring. One missed me by about six inches. I think they were just trying to wind people up.
It's difficult to evaluate how successful a march is. Marching to Trafalgar Square inevitably invited comparison with March 31st and in a way demonstrated how weak the poll tax movement is (on the streets at least, in terms on non-payment we are probably stronger than every, although its a very individualised 'movement'). On the other hand it was important to 'reclaim the square' and show that we weren't going to be stopped from marching in Central London'.
More on the poll tax: