'The fight is for life!' - protests against Italian anti-rave law 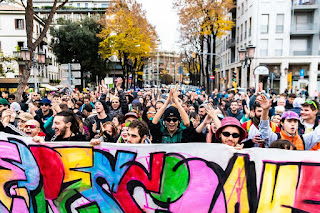 The far right Italian government is planning to bring in a new law against raves. The law was announced following the recent closing down of a three day Halloween party attended by some 3000 people in Modena.
The  proposed law includes provision to convict 'anyone who organizes and promotes the arbitrary invasion of other people's land or buildings, public or private, in order to organize a musical gathering or gathering for other entertainment purposes', punishable by up to 6 years in prison.
Opposition to the law is growing. The pictures here are of a demonstration against it by hundreds of people in Treviso on 11th November 2022. The march was organised by the Treviso social centre CSO Django and featured a sound system, flares and a large 'No to repression' banner. 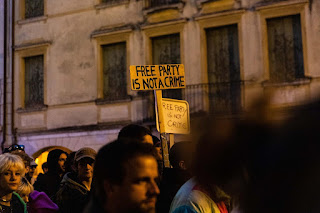 CSO Django say that the law is part of a pattern of measures that 'aims to suppress everything that is somehow considered uncomfortable, unpleasant or that expresses radical criticism, in words and in facts, to the model of society we live in.
On Saturday we reiterated clearly that the repression of movements, struggles and social phenomena is one of the forms in which those who exercise power try to leave the model of society we live in unaltered.
Saturday's street parade brought different subjects into communication, who together built a demonstration that went through the city in a colorful and noisy manner, proving that it is possible to work together, within our differences, to build, from the bottom up, different moments of sociality free from market logic, delivering anti-racist, anti-sexist and anti-fascist messages...
Against the ideology of profit, the practice of creating resilient and caring communities. We claim the right to be anomaly, to be a grain of sand in the gear of a world in which market logics aim to make everything a consumer product.We claim the right to practice dissent and conflict, as the only engine capable of changing the balance of power and modifying the existing one.
Against the advancing nothingness, the fight is for life!'
Statement and photos from CSO Django on facebook. There is also a report with video footage at La Tribuna di Treviso. 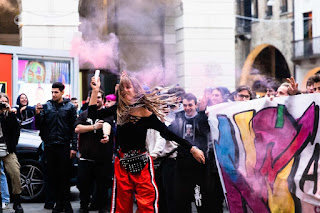