Darryl Pandy died yesterday (10 June 2011). Here's why he was important:
Before the internet and satellite/cable channels the musical moving image was as severely rationed as food in the second world war. Today we can happily waste hours browsing our way through endless music videos; in those days we were limited to an hour or so a week, chiefly in the UK the half hour 'Top of the Pops'. Of course that gave that half hour an enormous cultural power, with millions of people avidly watching. And amidst all the dross there were moments when whole generations recognised that something had changed, when adolescent outsiders saw a new world of possibilities open up, when tiny subcultures exploded into the nation's living rooms. When the faces barely featured on TV during the rest of the week - black, gay, 'freaks' - seemed to have momentarily seized control of the transmitter. So, people of a certain age will spontaneously recall the impact of seeing David Bowie performing Starman on Top of the Pops in 1972 (still looks magnificently queer nearly 40 years later). For punk, the Sex Pistols 'Pretty Vacant' had a similar impact in 1977. For house music, that moment came in 1986. In August, the single Love Can't Turn Around entered the UK singles chart, climbing to a number ten position by 27 September. The record was credited to its producers - Farley 'Jackmaster' Funk and Jessie Saunders - but it was the vocalist who stole the show when the song made it on to Top of the Pops. 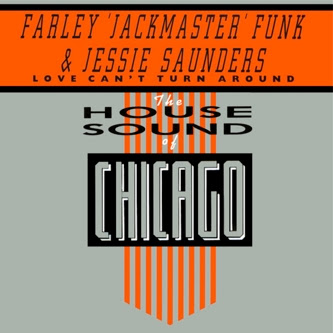 Darryl Pandy had been a singer in the choir of the Church of Universal Awareness in Chicago, and he brought all of his gospel experience to an incredible live vocal performance on Top of the Pops, though not sure he learned to dance around in a sparkly top, kick off his shoes and lie on the floor in church.
In the conventional history of house music in the UK the impression is sometimes given that it all started when the South London clubbing crew (Rampling, Oakenfold etc.) returned from their 1987 Ibiza holiday and started putting on club nights. But a full year before that Darryl Pandy had helped detonate the house explosion in the UK, followed shortly after by Jack Your Body - a number one record in January 1987 for Steve 'Silk' Hurley. Incidentally Hurley had shared a flat with Farley Keith in Chicago, and had himself produced an earlier house version of Isaac Hayes' I Can't Turn Around. It is true that in these early days there wasn't a distinct UK house scene as such, but on dancefloors in London, Manchester and elsewhere early house tracks like Love Can't Turn Around took their place alongside other great electronic dance and funk tracks - 1986 was also a good year for Mantronix, Cameo, Prince, Janet Jackson and Joyce Simms, not to mention Madonna, New Order and early Pet Shop Boys.
So thank you Darryl Pandy for kicking off house music for me and many others. In an early article on house music in Spin magazine, Barry Walters recognised that Pandy's vocal performance embodied part of what was essential about house music: 'Darryl Pandy is an enormous man, a Refrigerator Perry gone disco diva. He comes from a Broadway and opera background and has a six and a half octave range. Ask him to prove it and he’ll gladly sing selections from Porgy and Bess, taking on both Porgy and Bess. On record, notably ‘Love Can’t Turn Around’, Pandy resembles a possessed cross between his idols Yma Sumac and Minnie Ripperton, with a dark trace of Loleatta Holloway. Like Doctor’s Cat, Pandy sings with emotions endearingly inappropriate to the material. He begins ‘Love Can’t Turn Around’ with all the hypermasculinity of an ill-fated Wagnerian baritone, to come back in the third verse as Screamin’ Jay Hawkins. His dynamics are so ridiculously wrong by contemporary R&B standards that they become absolutely right for house. Pandy’s histrionics are emblematic of the house scene in general. House is about the loss of decorum and control. From sexual extravagance to dance-floor excess, everything about house is geared towards losing it’ (Burning Down the House, Spin, November 1986)
Posted by . at 6/11/2011 07:38:00 am

Loleatta died earlier in the year as well. Sad times.

Thank you for posting this. I will always be a huge fan of Darryl Pandy. I am sad not only because of his passing, but because there has been barely a ripple in the news about this. He has a great GREAT voice that will bring joy forever to people who hear his recordings. He deserved way more recognition than he ever got.

I agree with you Valerie. I have known Darryl since grade school back in Jeffrey Manor. People use to laugh at him but he kept on singing. Way before he did house music, there was gospel and even opera. Darry had a one of a kind talent. He used his voice to Glorify God way before he went secular. No he never got his recognition, but he's definitely got his reward in heaven, he used what God gave him and now heaven has got a new lead singer. That's recognition enough.

Thank you for writing this. Darryl was awesome. I will never forget him.

Just found out about Darryl Pandy..one the greatest House vocalists, m sure the community felt that deeply..#RestInPower