From the NME, 17 March 1984, Neil Spencer interviews Linton Kwesi Johnson. Don’t call him a dub poet…
‘I’m not a dub poet and I don’t want to be classified as one… I’ve always seen myself as a poet full stop. I write mostly in the reggae tradition so my work can be described  as reggae poetry in the same way as jazz poetry, blues poetry.. but dub poetry no. I’m responsible for coining the phrase, as early as 1975 in a pamphlet I wrote called Race and Music but then I was talking about the reggae DJs and describing what they do as poetry, as dub lyricism’ 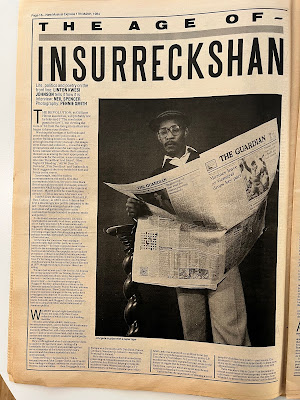 [click images to enlarge]
Extract from interview:
Do you think it's important for black Britons to have a separate identity?
I think they have to forge their own identity from their own reality. The cultural gap between my generation, when we came to this country, and my children and their contemporary white friends, it's negligible.
What are you saying there? There's been no real change between conditions for blacks in Britain between then and now?
Oh, there's been changes, but we've had to fight for them. We've made a lot of progress, tremendous progress I believe, over the last 25 years, and as the events of '81 show clearly, we've moved from the era of the '50s and '60s and early '70s, which was an era of resistance, to an era of insurrection. And that is progress from my point of view.
Progress in what respect?
We're now accepted as being part of the country, even the repatriation lobby has to recognise and live with that. The state and the political parties, those who have power in this country, recognise that we have something to offer, we can swing an election particularly in marginal constituencies.
When Thatcher was running for election in 1978 she made those racist speeches about Britain being swamped by an alien culture; well, as you can see, by the last election they'd changed their tune and were trying to win the black vote.
The riots of '81 seemed almost like fulfilments of prophecies you'd made on the
first two LPs.
Well, not so much prophecies, anyone with any common sense could see it, I wasn't unique in saying those things. There had been a lot of mini-riots throughout the '70s, Basically I think the seeds were sown by the police in the '70s and things came to a head with a new generation of youth.
They were anti-police riots primarily?
Definitely. Anti-police and anti-establishment. All the foreign press reported them as race riots, and some press here too, but you and I and Joe Public know different, because though the young blacks were primarily in the leadership of those insurrections - in Brixton, Toxteth, Manchester whites were a big part of those riots.
I think a lot of the frustrations of the unemployed came out there, and were no means confined to them because a lot of those arrested and charged with looting were workers, people in jobs.
On the LP, on the title track and the tone you adopt is, not exactly rejoicing but…
Celebration! An event to be celebrated! It's an important event in the history of blacks in Britain. It's part of our making history in Britain.
Do you think it changed anything?
Of course it did.
What exactly?
I think it's given the establishment and the police a measure of what blacks can do if pushed too far. It did away with saturation policing. They've eased up a bit, been more careful how they move. Things have generally cooled down. And the project hatchers have got a bit more monev out of it.
A lot of the anger about the New Cross massacre spilled over into the riots. a lot of people can't see that, it was only a month after the day of action that the Brixton riots started. 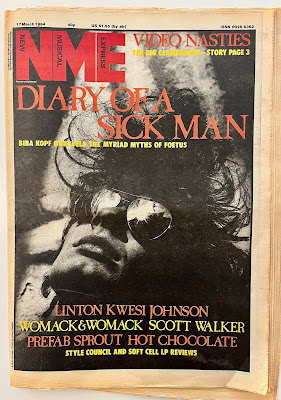