The first march against nuclear missiles at Greenham Common, 1980

There have been a number of events this year to mark the 40th anniversary of the Greenham Common Women's Peace Camp. Having been chosen as one of two sites for the location of Cruise nuclear missiles, RAF Greenham Common in Berkshire became a main focus for the movement against nuclear weapons in the 1980s. In September 1981 a group of women set up the first women's peace camp at the base, which remained in place until missiles left in 1991 (and indeed some women continued to protest there for years later).
But I believe the first major protest at Greenham Common took place a year earlier with the March Against Cruise Missiles on 21 September 1980, called by Newbury Campaign Against Cruise Missiles and the Southern Regional Campaign Against the Missiles. Around 2,500 people marched from Victoria Park in Newbury to the Greenham Common air force base.
Earlier that year, while at Luton Sixth Form College, I had been involved in setting up Luton Nuclear Disarmament Campaign and I believe this was the first time we went on a demonstration as a group. (the poster above advertises coaches to the demo from Luton in bottom right corner). I took a few photos on my cheap camera which do though give a flavour of the demonstration. 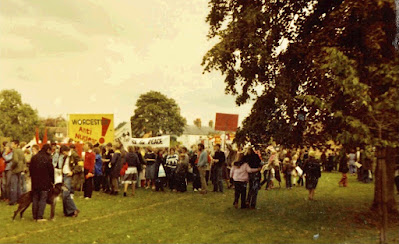 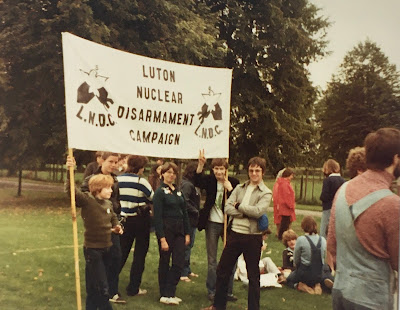 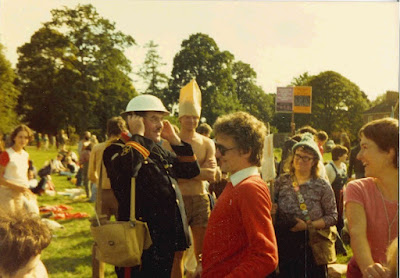 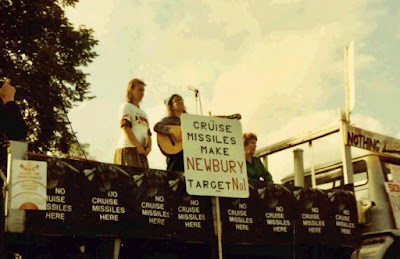 A few weeks later we went on the massive CND Protest and Survive demonstration in London, which I've written about here before.
[The influence of Greenham women went far beyond the peace movement. The tactic of a semi-permanent 'protest camp' engaging in ongoing non violent direct action has been widely adopted since, notably in the 1990s anti-road movement which interestingly fought one of its key struggles not far from Greenham at the Twyford Down protest against the Newbury bypass. Throw in the 1640s English Civil War Battles of Newbury and there's your radical history of Newbury book right there!].
More Luton posts here
Posted by Transpontine at 6:13 pm