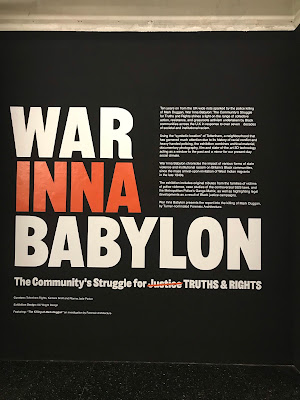 'War Inna Babylon: The Community’s Struggle for Truths and Rights'  at London's Institute for Contemporary Arts (7 July – 26 September 2021) is an exhibition curated by community organisation Tottenham Rights, together with independent curators Kamara Scott and Rianna Jade Parker. They say:
'Ten years on from the UK-wide riots sparked by the police killing of Mark Duggan, this exhibition shines a light on the vast range of collective actions, resistance and grassroots activism undertaken by Black communities across the U.K in response to over seven decades of societal and institutional racism.
Using the ‘symbolic location’ of Tottenham, a neighbourhood that has received much attention in recent years due to its history of racial conflicts and heavy-handed policing; this exhibition combines archival material, documentary photography, film and state-of-the art 3D technology to ‘act as a window to the past and as a mirror for our present-day social climate’.  War Inna Babylon will chronicle the impact of various forms of state violence and institutional racism targeted at Britain’s Black communities since the mass arrival-upon-invitation of West Indian migrants in the late 1940'. 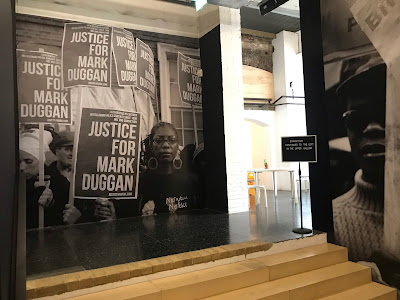 The exhibition is strikingly displayed in a way which does justice to its somber subject matter, including al list of deaths at the hands of the police and Forensic Architecture's detailed investigation of the police shooting of Mark Duggan in 2011

"Frontlines, as they are affectionately known by locals, were the only tangible public spaces where Black people felt relatively safe enough to convene, especially as they were ostracised from mainstream venues. As so, the police would invade these locations... 'Symbolic locations' were determined by PC Kenneth Newman, Commissioner of Police for the London Metropolitan force from 1982 to 1987. In various speeches and articles he would offer: Broadwater Farm in Tottenham, Railton Road in Brixton and All Saints Road in Notting Hill as prime examples of 'no go' areas...
[In the aftermath of the 1980s riots] "...Oliver Letwin - then an adviser to Margaret Thatcher - advised her not to believe that the uprisings stemmed from systematic inequalities. Letwin blamed unrest on 'bad moral attitudes' and dismissed suggestions to fund communities, claiming that Black business owners would set up a 'disco and drug trade'. The police sought on occasions to restore  - 'take back' - these neighbourhoods. And so, community-led Frontlines where Black people were able to practice a level of autonomy were subjected to intense surveillance and military-style operations, quickly becoming sites of resistance"
Posted by Transpontine at 9:28 am