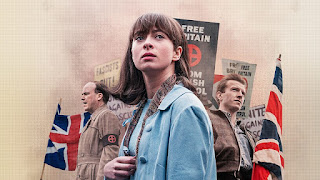 The BBC series 'Ridley Road' (2021) is a fictional drama which draws on real historical events - the activities of Colin Jordan's neo-nazi National Socialist Movement in Britain in the early 1960s, and the efforts of its opponents, especially Jewish ones, to stop it through intelligence gathering, demonstrations and ultimately physical force. The series adapts Jo Bloom's novel of the same name and its main story line of a Jewish infiltrator going to the extent of sleeping with Jordan may be a fictional device. But it needs to be restated that much of the action in the series is based on actual events - especially as some including a Daily Telegraph columnist have complained that it is BBC propaganda that overstates the threat of the far right in order to whitewash left-wing anti-semitism. The latter certainly exists in some quarters but to deny the menace of organised far right anti-semitism seems perverse - we are talking about people who actually burnt down synagogues.

Here's some contemporary documentation of episodes featured in 'Ridley Road'

Colin Jordan founded the National Socialist Movement in 1962 having split from the far right British National Party because they weren't explicitly Nazi enough for him. He was a leading figure in the international neo-nazi movement and in 1962 hosted a visit by the leader of the American Nazi Party, George Rockwell. The latter was deported from the country in the aftermath of a far right camp in the Cotswolds.

The camp in Guiting Wood 'was stormed by 100 Cotswold villagers'. A swastika flag 'was hauled down after its centre had been blown out by a 12-bore shotgun, and as the villagers wrecked the camp the party followers fled' ('Fuhrer hunt hots up as Nazis routed', Aberdeen Evening Express, 8 August 1962). The Daily Mirror termed this 'The Battle of Dead and Bury Hollow' after the part of the wood where the fighting took place ('Village Army Routs Nazi Camp', Daily Mirror, 8 August 1962). 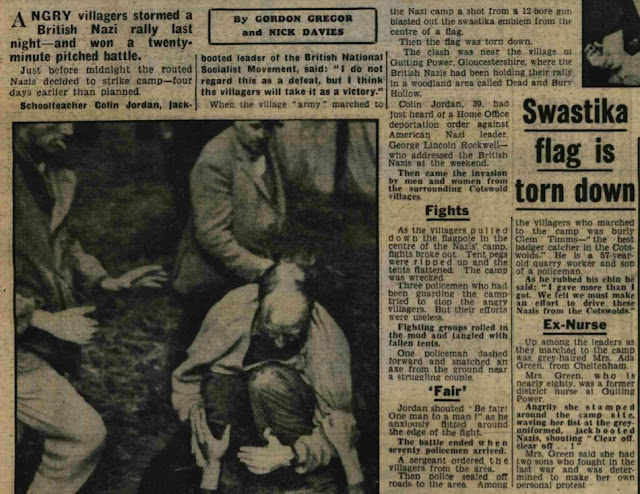 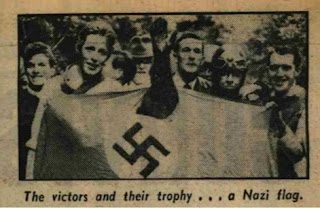 Rockwell boasted shortly afterwards that he and Jordan 'had made certain arrangements which will "shock the world within six months''' (Belfast Telegraph, 10 August 1962). It was during his 1962 visits that Jordan and Rockwell established the World Union of National Socialists.

Jordan was married to Françoise Dior

Françoise Dior was the niece of French fashion designer Christian Dior, though as an international nazi activist she was denounced by her family - Christian's sister Catherine (Françoise's aunt) had been sent to Ravensbrück concentration camp for her activities in the French resistance. Dior and Jordan are believed to have met in 1962 and married the following year in Coventry, to anti-fascist protests:

'British National Socialist movement leader Colin Jordan and his French bride Françoise Dior were bombarded with eggs, stink bombs and pieces of turf by part of an angry crowd of about 500 after their marriage at Coventry registry office today. Jordan (40) and his 31 year old bride – she is a niece of the late fashion designer Christian Dior – greeted the crowd with Nazi salutes after the 15 minute ceremony. They were met by a chorus of boo and jeers, and the crowd surged forward in the attempt to break through the police cordon' (Belfast Telegraph, 5 October 1963).

Dior was an enthusiast for Synagogue burning, and was involved in an arson plot by NSM members to put this into action. She was jailed in 1967 in relation to arson and attempted arson attacks against 10 synagogues in the London area in 1965, having told  police that she 'would like to make an Act of Parliament to burn down all synagogues by law'. Among the buildings targeted was the Brondesbury Synagogue, extensively damaged in March 1965 and the Herbert Samuel Hall Synagogue in Notting Hill in June of that year (Belfast Telegraph, 7 September 1967).

London's Trafalgar Square was a flashpoint in 1962, with two major confrontations in July of that year. Jordan's NSM held a 'Free Britain from Jewish Control' rally there on 1 July. There was mass opposition: 'speakers were almost drowned by jeers from the 2,000 strong crowd' which 'charged hurling eggs, fruit, tin cans and coins'. The NSM's truck was stormed and its banner 'broken and burned'. 21 people were arrested' ('Battle of Trafalgar Square: Fury at Fascist Meeting', Daily Mirror, 2 July 1962). 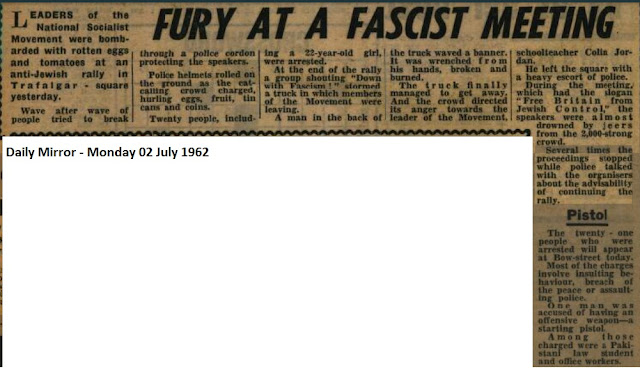 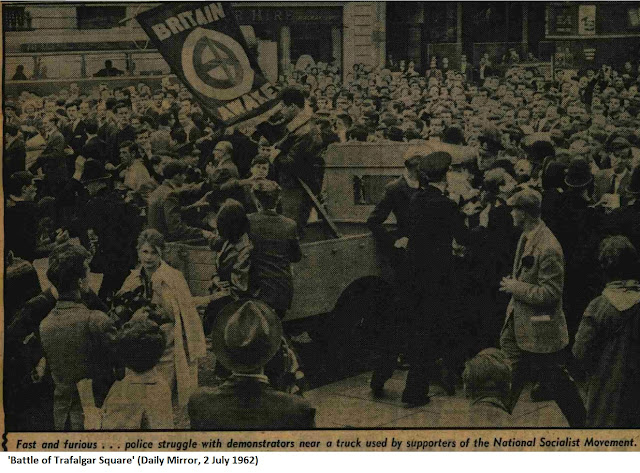 A few weeks later on 22 July  1962 another far right organisation, Oswald Mosley's Union Movement, tried to hold a meeting in Trafalgar Square with similar results: 'Stones and tomatoes were thrown, placards and flags torn down and police cordons made helpless by a crowd of 7,000'. There were 55 arrests ('Mosley Meeting Wrecked, Birmingham Daily Post, 23 July 1962). 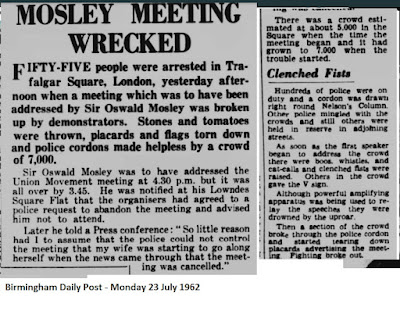 Ridley Road, Dalston was a key battleground between fascists and their opponents in 1962, just as it had been in the 1930s and 1940s as an area with a well established Jewish community. Just a week after being driven out of Trafalgar Square,  the Union Movement attempted to meet there but were opposed by a large crowd:

'Sir Oswald Mosley was hurled to the ground and then punched and kicked in London's East End last night. The 65-year-old leader of the Union Movement was jumped upon as he arrived for a meeting at Ridley Road, Dalston - scene of many clashes with Blackshirts in the 1930s. The rally last night turned into a three-minute-fiasco - that was the time Mosley was allowed to speak before police were forced to stop his meeting because of rioting. And after the meeting police arrested 48 people including Mosley's ginger-haired son, Max. For an hour before Mosley arrived, the police had struggled to control the 1500 strong crowd of jeering, shouting East Enders... Chants of 'Down with Mosley' and 'Sieg Heil' drowned his words. Rotten fruit, stones and coins were hurled at the grey-suited Union Movement leader' ('Mosley beaten up again, Daily Mirror, 1 August 1962).

('The magic words "Mosley Speaks" will spark a riot anywhere... in this stronghold of anti-fascism their appearance was a guarantee of  trouble... they cried 'Down with Mosley and down he went'  - Pathe newsreel of Mosley in Manchester then in Ridley Road in July1962 - still below shows anti-fascists being held back by police in Ridley Road)

With plans for further fascist meetings on 2 September, the Home Secretary banned all demonstrations in the area -  affecting planned events from the British National Party and the anti-fascist Yellow Star Movement, though static meetings were not covered by the ban. Following the announcement there was an explosion outside a synagogue in Stoke Newington described by Rev. Sargent of the Yellow Star Movement as 'fascist activity' (Coventry Evening Telegraph, 1 Sept 1962). Sargent was the vicar of Holy Trinity Church in Dalston and one of the founders of the anti-fascist group who held a position of non-violent opposition to the far right - disagreement with this position led some to form the 62 Group, a militant Jewish organisation set up in August 1962 and who were the main inspiration for the Ridley Road drama. They were to play a major role in fighting the far right for the rest of the decade.

On 2 September the Yellow Star Movement occupied Ridley Road to prevent the BNP holding a meeting. The BNP had gathered nearby in Balls Pond Road where 'they were attacked by several hundred men' - probably one of the first actions involving the new 62 Group.

On the same day, Mosley's Union Movement was forced to abandon a meeting in Victoria Park Square, Bethnal Green, after two minutes. A crowd of 3000 broke through police lines and Mosley faced 'Boos,  blows, eggs and stink bombs'. There were 40 arrests (Birmingham Daily Post, 3 September 1962).

There were further clashes on 16 September, when Hackney Young Socialists occupied the space in Ridley Road where Mosley's supporters were planning to rally.  As fascists 'marched into the Young Socialists rally... Fighting broke out immediately. It spread through the crowd in Ridley market and spilled out into Stoke Newington High Street' (The Newsletter - Socialist Labour League, 22 Sept.1962) 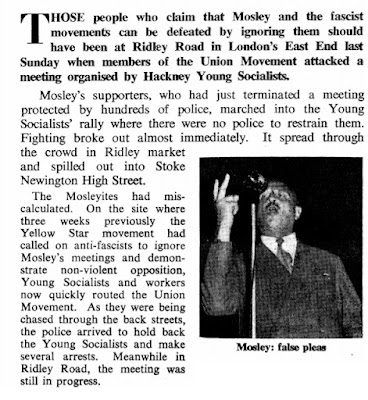 Colin Jordan was jailed for 9 months in 1962 having established 'Spearhead' as a paramilitary force linked to the NSM. The latter was relaunched as the British Movement in 1968. In the same year he was 'beaten up in a well-planned attack by a group of men in Birmingham... Jordan was in Waterloo Street in the city centre with four other men handing out leaflets for a meeting when about 30 men came running round the corner and set upon them' (Aberdeen Evening Express, 11 September 1968).

Jordan remained an active neo-nazi until his death in 2009. While some of his erstwhile collaborators attempted to tone down their public rhetoric and present themselves as simple British patriots, Jordan never disguised his Hitler worship and virulent anti-semitism.

The events of 1962 sparked not only militant anti-fascism but a wider call for legislation against incitement to racial hatred. More than 100,000 people signed a Yellow Star petition calling for this, and 'Three hundred teenagers from Jewish and non-Jewish youth clubs in the Hackney area' marched from Ridley Road to Downing Street in support of this.

Posted by Transpontine at 8:56 am