Sophie Richmond on the politics of punk (1977)

So many words have been spilt about first wave UK punk and politics over the last 45 years, but one of the most lucid contemporary assessments came from within The Sex Pistols camp. Sophie Richmond worked for Malcolm McLaren's Glitterbest management company. Amidst all the chaos somebody had to make sure the bills got paid (or not), but she did a lot more than  admin. She was part of a collective effort around the band, also including her then partner Jamie Reid who designed the Pistols' art work.

It's quite remarkable that in the midst of all this she should take time to consider the political significance of it all for an obscure libertarian communist magazine, Social Revolution (no.7, 1977) . The group behind it had been formed in 1975 and was soon to merge with the longer established Solidarity group. Political threads from this current led back to a shared heritage with the Situationists in the group Socialisme ou Barbarisme - the Situationists being an influence on McLaren and Read among others. Plainly Richmond, then 25 years old, had her own political perspectives that predated punk and the Pistols.

Her conclusion from the heart of the storm is succinct and accurate - music on its own can't change the world, romantic myths of heroic outsiders are a dead end and punk was inevitably on the road to being assimilated. And yet it was expressing something real, addressing how many young people felt, and opening a door of possibility where interesting things might happen before the door slammed shut once again. 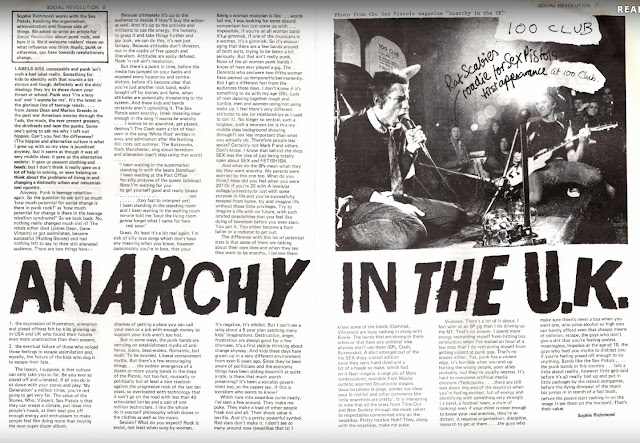 'Labels are inescapable and punk isn’t such a bad label really. Something for kids to identify with that sounds a bit vicious and tough, definitely anti the shit/ideology they try to shove down your throat at school.

Punk says “I’m a lazy sod“ and “I wanna be me“. It’s the latest in the glorious line of teenage rebels… From James Dean and Marlon Brando in the postwar American movies through the Teds, the mods, the ever present greasers, the skinheads and now the punks. Someone’s going to ask me why I left out the hippies. Can’t you feel the difference? (the hippies and alternative culture is what I grew up with so my view is jaundiced anyway, but it seems as though it was all very middle-class; it gave us the alternative society; it gave us peasant clothing and beads; but I don’t think it really gave us a lot of help in solving, or even helping us think about the problems of living in and changing a distinctly urban and industrialised country.

Anyway. Punk is teenage rebellion again. So the question to ask isn’t so much “How much potential for social change is there in punk rock?” as “how much potential for change is there in the teenage rebellion syndrome?” So we look back. No, nothing really changed much did it? The rebels have died (James Dean, Gene Vincent) have got assimilated, became successful (Rolling Stones) and have nothing to left to say to their still alienated audience. There are two things here –

1. the expression of frustration, alienation and pissed offness felt by kids growing up in USA and UK who found the future is even more unattractive than their present.

2. The eventual failure of those who voiced those feelings to escape assimilation and equally, the failure of the kids who dug it to escape their fate.

The lesson, I suppose, is that culture can only take you so far. Be you ever so pissed off and alienated, if all you do is sit down with your stereo and play "My Generation" a million times, you’re not going to get very far. The value of the Stones, Who, Vincent, Sex Pistols is it they can create a climate, put ideas into people's heads, at their best give off enough energy and enthusiasm to make people feel like they’re doing more than buying the next super duper album.

Because ultimately it’s up to the audience to decide if they’ll buy the action as well. And it’s up to the activists and militants to use the energy, the honesty, to grasp it and take things further and say look, we can do this, it’s not just fantasy.  Because attitudes don’t threaten, not in the cradle of free speech and liberalism. Attitudes are easily defused, rock ‘n’ roll ain’t revolution.

But there’s a point in time, before the media has jumped on your backs and exposed every hypocrisy and contradiction, before it’s become clear that you’re just another rock band, easily bought off by money and fame, when attitudes are potentially threatening to the system. And these kids and bands certainly aren’t upholding it. The Sex Pistols want  anarchy (their meaning clear enough in the song “I wanna be anarchy… I wanna be an anarchist, get pissed, destroy");  The Clash want a riot of their own in the song “White Riot" written in envy and admiration after the Notting Hill riots last summer. The Buzzcocks from Manchester sing about boredom and alienation (can’t stop using that word)…

Great. At least it’s a bit real again. I’m sick of silly love songs which don’t have any meaning when you know, however passionately you’re in love, that your chances of getting a place you can call your own or a job with enough money to support your kids aren’t too hot.

But in some ways the punk bands are carrying on establishment myths of antiheroes, losers, dead enders. Romantic but slush. To be avoided. Liberal containment myths. But there’s a few encouraging things… The sudden emergence of a dozen or more young bands in the steps of the Pistols, not too hot musically or politically but at least a nice reaction against the progressive rock of the last 10 years, so overloaded with technology that it can’t go on the road with less than 40 articulated lorries and a cast of one million technicians. I like the whole do it yourself philosophy which shows in the clothes as well as the music [...]

Bands like the Sex Pistols… The punk bands in this country… Talk a little about reality, however little gets said before it’s all neatly tied up and put in little packages by the record companies, before the dying dinosaur of the music biz jumps in in search of a fast buck, before the posers start cashing in on the image (I see them on the horizon). That’s their value'. 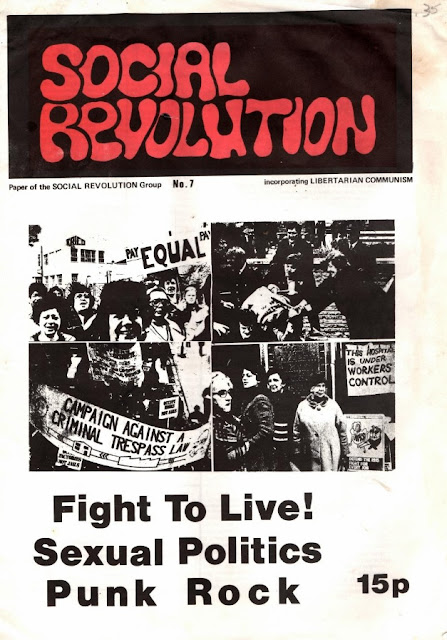 There's a 2013 interview with Sophie Richmond here
Sophie Richmond's diaries of her time with the Pistols are quoted from extensively in Fred and Judy Vermorel's book 'Sex Pistols: the inside story' (1978).
Posted by Transpontine at 1:30 pm