In the aftermath of the London poll tax demonstration and riot on 31 March 1990, the Trafalgar Square Defendants Campaign to ‘Unconditionally defend all those arrested on March 31st’ was launched at a meeting held at London's Conway Hall.

Through court monitoring, support from sympathetic lawyers, and gathering its own evidence, the TSDC was able to provide effective legal advice and information which led to many people being acquitted or having their charges and sentences reduced. The following appeal for witnesses (original an A4 leaflet) was part of this process of developing a detailed chronology of events with which to challenge police accounts. 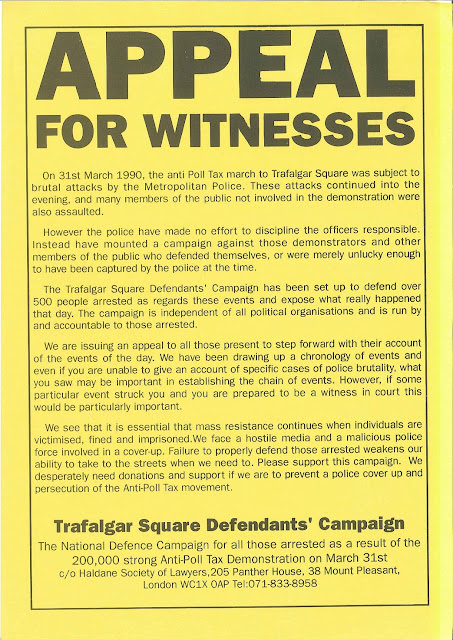 On 31st March 1990, the anti Poll Tax march to Trafalgar Square was subject to brutal attacks by the Metropolitan Police. These attacks continued into the evening, and many members of the public not involved in the demonstration were also assaulted.

However, the police have made no effort to discipline the officers responsible. Instead they have mounted a campaign against those demonstrators and other members of the public who defended themselves, or were merely unlucky enough to have been captured by the police at the time.

The Trafalgar Square Defendants Campaign has been set up to defend over 500 people arrested as regards these events and to expose what really happened that day. The campaign is independent of all political organisations and is run by and accountable to those arrested.

We are issuing an appeal to all those present to step forward with their account of the events of the day. We have been drawing up a chronology of events and even if you are unable to give an account of specific cases of police brutality, what you saw may be important to establishing the chain of events. However, if some particular event struck you and you are prepared to be a witness in court this would be particularly important.

We see that it is essential that mass resistance continues when individuals are victimised, fined and imprisoned. We face a hostile media and a malicious police force involved in a cover-up. Failure to properly defend those arrested weakens our ability to take to the streets when we need to. Please support this campaign. We desperately need donations and support if we are to prevent a police cover-up and persecution of the Anti-Poll Tax movement.

Trafalgar Square defendants campaign
The national defence campaign for all those arrested as a result of the 200,000 strong anti-poll-tax demonstration on March 31