Global dance protest says no to violence against women 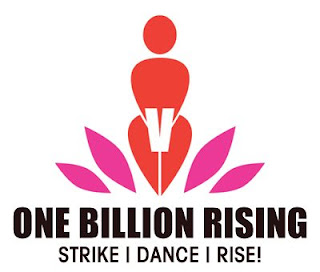 On Valentine's Day last week, there were flashmob dances and similar actions in at least 190 countries as part of One Billion Rising, a call to 'strike, dance, rise' and 'SAY NO to violence against women and girls':

'One in three woman on the planet will be raped or beaten in her lifetime.... One billion women violated is an atrocity. ONE BILLION WOMEN DANCING IS A REVOLUTION.

On V-Day's 15th Anniversary, Feb-14-2013, we are inviting one billion women and those who love them to WALK OUT, DANCE, RISE UP and DEMAND an end to this violence. ONE BILLION RISING will move the earth, activating women and men across every country. V-Day wants the worlds to see our collective strengths, our numbers, our solidarity across borders. Join V-Day and ONE BILLION RISING today and SAY NO to violence against women and girls'.

Jill Filipovic in The Guardian:

And so it's with our bodies that we should act. When our bodies have been politicized, targeted and defined for us, there's power in the simple enjoyment of that body. When women are supposed to be small and inoffensive, taking up public space is a radical act. It's unladylike. Dance, OBR reminds us, is both free and freeing. Will dance save the world? Of course not. And it certainly won't end violence against women. But any worldwide movement that focuses on the appalling levels of violence that women face and crafts a national day of action to push back against that violence is fine with me'.

And the biggest news story on that day? Another woman killed by her boyfriend. In Pretoria, 'No Killing of Women and Children' featured on another protest a few days later - outside the court where Oscar Pistorious was accused of the murder of Reeva Steenkamp. 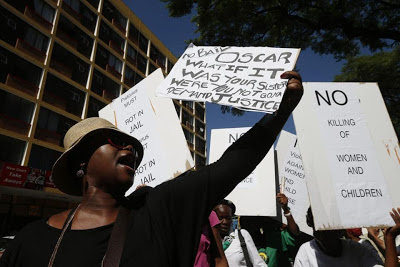 Posted by Transpontine at 11:01 am