A shrine to a pirate

On Redcross Way SE1 (near to London Bridge station), the site of a paupers' graveyard was discovered during construction of the Jubilee line on the London underground in the 1990s. Crossbones has become a remarkable unofficial shrine where people gather on the 23rd of every month to remember the outcast dead buried there, and also their more recently departed loved ones. 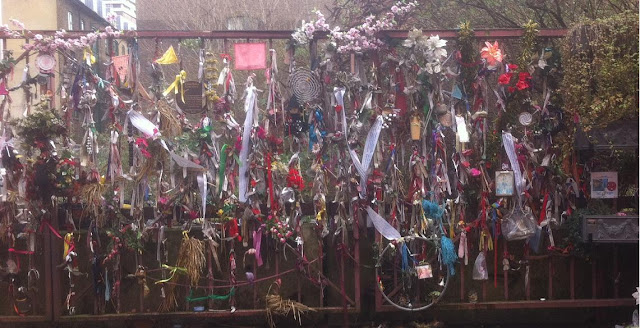 Going past last week I noticed a notice in memory of Jason Fisher (1979-2011), aka Angryness and Brimstone - evidently a pirate radio stalwart from South London and Kent. The notice also says 'Pirate Radio is Good for Your Mind'. 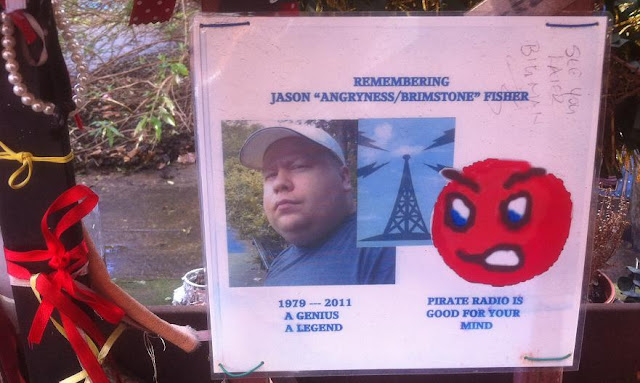 'Brimstone' was particularly associated with Essence FM, broadcasting in Kent from the early noughties (FM 105.1 - 105.0, 2000-2007). According to farstep in a discussion at Radionecks, Essence 'used to broadcast from Thanet (usually from tower block flats in Margate or Ramsgate) used to be a great little station playing UKG, DnB, Happy Hardcore, House etc. ... anyway was nice to hear it when it was about and to date its been the only one that was audible in Thanet/Kent which is a bit sad to say the least as we need something on round here. There was briefly Sweet FM which went on for one night from a farm in Ramsgate but sounds to me they got dobbed up and never returned. Friend of mine did a set on Rival FM but I dont think that lasted long either so Essence was really the only driving force around these parts'

This prompted an interesting reply:  'Hi everyone, I'm "Brimstone's" dad. First of all I like to say how much I and family and friends miss him. I believe he started Essence FM in around 2000 with Frantic and Mr Woo was also involved and this went on till about 2005. He built rigs at one time then did repairs then designed and built link boxes and audio limiters of high quality. He left radio behind and then he was into computers and built his own website. He was quite well known in the pirate world around London, Essex and Kent. He did pirate radio proud. He was a genius...  I am writing a book on his life and collecting any info about his radio days if anyone feels they have a story please let me know'.

A Radiocommunications Agency press release (31 January 2003) descirbes Fisher's arrest at the top of an aerial:
'Two pirate operators were convicted at Camberwell Magistrates Court on 27th January 2003 for offences under the Wireless Telegraphy Act 1949. Jason Fisher of Priestwood House, Drummond Road, Rotherhithe, London, SE16 and Michael Pruce of Philip Walk, Peckham, London, SE15, both 23, were each given 18 months conditional discharges and ordered to pay £150 costs after being found guilty of participating in the running of a pirate radio station calling itself Essence FM.

28 September last, the two defendants were caught at the top of a 180ft-cell phone aerial with tools and radio transmitting apparatus. When questioned they stated they were enjoying the aerial views. However, they subsequently admitted the offences when interviewed. The court ordered the seized equipment be forfeited'.
Posted by A2 at 6:00 am

Hi, I'm Brimstones dad David. Thank you for putting the fotos and comments. I'v just found this so thanks again who ever you are. I attend the Crossbones vigils every month on the 23rd.

I knew brim before he did pirate radio in margate,one of my closest friends who i miss terribly xx

Was a friend of brims taught me alot about electronics which i still do to this day thanks to jay was a top geezer and a legend to me he knew everything lol miss u mate but the legend still lives on :)