Skinheads as Independent Travellers in Space

I went to Cafe Oto in Dalston a couple of weeks ago for a reading by two members of Wu Ming, the Italian writing collective responsible for novels including 54, Q (written under the name Luther Blisset) and the newly-translated Manituana.

At least one of the four Wu Mings was associated for a while with the Association of Autonomous Astronauts (1995-2000), the multi-dimensional politico-creative network dedicated to 'independent community-based space travel'. The premise of the AAA was for people to form their own groups (often it must be said, just one or two people) to put their own slant on the mission. Thus my node in the network was Disconaut AAA, dedicated to the use of dance music for space exploration, while electronic/industrial outfit Nocturnal Emissions was associated with AAA Kernow. Messrs Eden and Grievous Angel had their own groups, as did others in France, Italy, Denmark, Holland, New Zealand and elsewhere.

From Bologna, a later Wu-Mingster launched 'Skin Heads as Independent Travellers in Space' (SHITS). This is their launch text, published in 'Moving in Several Directions at Once! The Third Annual Report of the Association of Autonomus Astronauts' (1998). The text celebrates 'proletarian elegance' and looking sharp, a theme that recurs in Wu Ming's novel 54 (discussed here recently). 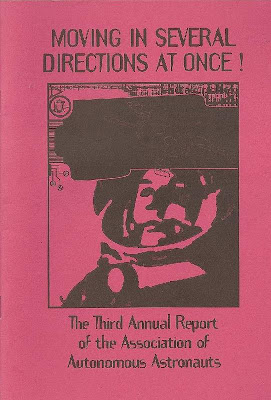 WORKING CLASS KIDS AGAINST SPACE IMPERIALISM
Only those whose boots stomp the ground will conquer the skies
by Fabrizio P. Belletati
In the name of Luther Blissett “I” announce the foundation of the SHITS (Skin Heads as Independent Travellers in Space).

Proletarians have never benefited by any space exploration programme launched by the great Powers. NASA in particular, that gigantic parasite, dissipated billions of dollars in order to take workers away from their everyday exploitation, inducing them to passively gaze at the deeds of yankee imperialism and the conquest of the “last frontier”. NASA introduced the average chauvinist redneck male as the cultural and aesthetic representative of the whole human species (in the American TV series Northern Exposure. a character named “Maurice Minnefield” effectively parodies pathetic flag-waving ex-astronauts). NASA has always attempted to militarise and commodify outer space (remember the infamous Ronald Reagan’s SDI plan).

The Associations of Autonomous Astronauts fight the present-day state, military and corporate monopoly of space travel, and exhort the oppressed of this world to build their own spaceships and get together into free communities of cosmonauts. The revolutionary proletariat has the power to expose the deceptions of the space travel establishment.

But I think that the AAA project must keep its distance from Hippie/New Age bullshit — we’re talking about class war — neither some kind of utopian-escapist plan (e.g. The Jefferson Starship Blows Against The Empire) nor some Star Trek Kennedyan dream — we’re talking about Jello Biafra’s rant Why I’m Glad That The Shuttle Blew Up.

The subcultural cross-fertilisation which originated the Skinhead style reached its peak in 1969, i.e. whilst NASA was organising and staging the first moon landing hoax. The creative clash between West-Indian music (Ska, Rocksteady and early reggae) and the Hard Mod look defines the so-called “spirit of ‘69”. We’ve got to hang on to this spirit of ‘69, and oppose it to the other, symbolised by the star spangled banner on a TV studio moon ground.

Original skinheads, suedeheads and later street punk skinheads COULDN’T GIVE A TOSS about such nerveless middle-class counterculture à la Jefferson Starship. Skinhead subculture can provide autonomous astronauts with a style and a sartorial rhetoric which break both with liberalism and hippy shit. Moreover, both the Suedehead evolution and the modernist heritage can work as stylistic North Stars and orient our efforts to an essential “proletarian elegance”. It’s a matter of self-respect: we can’t figure what clothes the inhabitants of other planets have on, but certainly we won’t go to the rendez-vous dressed like shaggy buffoons!

Skinhead Moonstomp is the title of a classic Ska anthem. That’s how we’re gonna deal with zero gravity: skipping about on a steady upbeat rhythm. Long live SHITS! Death to NASA!

Posted by Transpontine at 9:02 pm